He appears in-game after the player claims his Character Unlock Mission reward for earning a combined total of 500,000 or more Duel Assessment points in Duel World (ARC-V) Duels.

Yellow Gate Keys are required to Duel Sylvio Sawatari at the Gate.

Pompous and proud, Sylvio considers himself one of the elite - and it's easy to see why! Not only does he attend the top-ranked Leo Institute of Dueling, his father is a heavyweight on the city council who's on the fast track to becoming the next mayor! But despite all his bluster, you shouldn't underestimate him - he's a skilled Duelist who expertly wields Yosenju and Abyss Actor monsters. After dueling against Yuya, Sylvio learns to love Dueltaining - which is perfect for a Duelist who wants to bask in the spotlight! 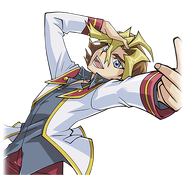 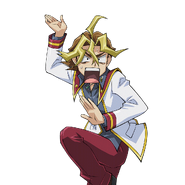 Sylvio Sawatari is Up!
Monsters (13)

When starting a Duel with Aster Phoenix, Sylvio announces "Aster! Huh? Have you shrunk?"

When starting a Duel with Alexis Rhodes, Sylvio announces "Aren't you from Duel Academy?"

When starting a Duel with Jack Atlas, Sylvio announces "Jack Atlas! I'll defeat you and become the new King!"

When starting a Duel with Crow Hogan, Sylvio announces "Crow! I'll take you on!"

*Disclosure: Some of the links above are affiliate links, meaning, at no additional cost to you, Fandom will earn a commission if you click through and make a purchase. Community content is available under CC-BY-SA unless otherwise noted.
... more about "Sylvio Sawatari (Duel Links)"
RDF feed
English name
Sylvio Sawatari +
Gender
Male +
Video game appearances
Yu-Gi-Oh! Duel Links +
Advertisement