In reference to its name, the club is established with the purpose of uncovering the mystery surrounding the "Number" cards without Yuma's help.

The club was formed after Tori and the others become interested in finding information about the "Number" cards. This is due to them finding out about various Duelists who were in the hospital, as they all seem to have been in the possession of a Number card. After questioning Yuma about the subject and him not giving an answer, the friends decided to investigate on their own. For that purpose, the group visited Fortuno, who ended up kidnapping them in order to lure Yuma and acquire his "Number" cards[1]. Fortunately, Yuma defeated Fortuno and saved the Club.[2]

Later on, Bronk made membership cards for the five members. This drew the attention of Ray Shadows, who begged Bronk to be let into the club. He considered it, but was shot down by Caswell, who reprimanded Bronk for bringing outside objects to the school. When Caswell gave up his disciplinary ways, he received his card.[3]

Later on, the club argued on who should be their representative. This caused them to refuse to speak to each other the following day, to Yuma's concern. Under Girag's suggestion, he and Ray formed the Friendship Games to help them make up. However, this was really a ploy by Girag to steal Yuma's "Numbers". Yuma's intent of making his friends get along again worked, but Girag brainwashed Tori and Cathy to steal Yuma's "Numbers" from him in the final round, but did not anticipate Yuma's partner, Shark, leaving the tournament early. As a result, he was forced to team up with Yuma to avoid his demise. They succeeded in defeating the girls, and Girag fled.[4]

When Yuma fell into a depression after losing Astral, the Club attempted to cheer him up, but failed. They decided to investigate Heartland Memorial Hall as part of their efforts, but they got captured by Mr. Heartland and Erazor, who stole their memories. Heartland informed Yuma about their capture, and coerced him to give him the "Numbers" so they could be freed. When Yuma refused, Heartland attacked him, but Trey saved Yuma. The boys teamed up in a Duel against Erazor.[5] During the Duel, the Club started to cheer Yuma on, even though they had their memories stripped away, due to their strong bonds with Yuma. Thanks to the Club's support, Yuma and Trey defeated Erazor.[6]

After Yuma completely lost to Kaito, his spirit got broken. Kotori tried many things to cheer him up, but nothing worked. Then, Tetsuo came up with the idea of helping Yuma collecting the "Numbers". With that, Kotori, Cathy, Tokunosuke, Takashi and Tetsuo form the "Numbers Club".

Later, due to information found by Tokunosuke, the Numbers Club, together with Yuma and Astral, go to the Heartland Theme Park to find "Numbers". There, Yuma collected three "Number" cards.

Later, the Club's headquarters is established in Cathy's mansion as an apology for the trouble she caused in the park. There, Cathy prepares a big room filled with researchers and big computers. Cathy explains that the room would be the headquarters, and from there, they can look up mysterious phenomena happening throughout the world, and therefore locate the "Numbers". Also, after absorbing three consecutive "Numbers", Astral explains he recovered some memories: his enemy is Dr. Faker, who plans on using the hidden powers of the "Numbers" to destroy the Astral World; However, the Astral World is linked to this world, so if the Astral World dies, this one will die as well. The Numbers Club then decide to save the world from Dr. Faker.

After that decision, the Numbers Club's members started using a new hero-style outfit and a helicopter (provided by Cathy). 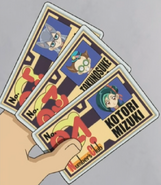 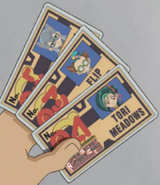 Other (dub)
Add an image to this gallery

Retrieved from "https://yugioh.fandom.com/wiki/Super_Secret_Number_Card_Investigation_Club?oldid=3582822"
Community content is available under CC-BY-SA unless otherwise noted.