Ferocious Dragons and ravaging Zombies clash in these two new Structure Decks. The Structure Decks are tournament tough, ready to play with out of the box with powerful hard to find cards. Each Deck contains 40 cards, including one brand new Ultra Rare monster, rulebook, and Dueling guide which assists a Duelist in taking his game to the next level.

The "Let's Power Up This Deck! (With Booster Packs)" supplement suggests combining this Deck with "Buster Blader" from Dark Beginning 1; "Judgement of Anubis" from Dark Revelation Volume 1; "Inferno Fire Blast", "Armed Dragon LV7", and "Level Up!" from Soul of the Duelist; and "Covering Fire", "Mirage Dragon", "Mystic Swordsman LV6" and "Monster Reincarnation" from Rise of Destiny ("Armed Dragon LV7" is also available as a promotional card in Structure Deck: Deluxe Edition). "Horus the Black Flame Dragon" is shown, but not described. 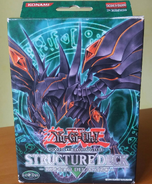