Originally intended as a unique occurrence, the first Deluxe Edition (later renamed Deluxe Edition —Volume 1—) was released by Konami of Japan on December 11, 2003, in an attempt to boost flagging sales of the Yu-Gi-Oh! OCG. Packaged in a collectible red and green case, it contained:

Also, an Ultimate Rare version of the ever-popular "Blue-Eyes Ultimate Dragon" (SDX-001) came with every box.

There is 1 card in this set: 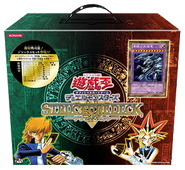 Japanese
Unlimited Edition
Add an image to this gallery