Strings, also known as the Quiet One, and known in the Japanese version as Doll (, Ningyō) or Pantomimer (パントマイマ, Pantomimer), is one of Marik Ishtar's Rare Hunters during the Battle City arc.

Strings is bald, has pointed ears, and his perpetually wide eyes are surrounded by heavy black circles and have very small blue pupils. He has many piercings all over his head: three near his right eye, one on each ear, three near his lip, one nose ring, and one lip piercing. He wears a black shirt and red pants with yellow suspenders. He wears a green bag across his chest, which is used to hold his Duel Disk. He wears large black shoes and has four studded cuffs on his arms, one at his wrist and one near his shoulder on each arm. He also wears a chain around his neck with a keyhole pendant at the bottom. When he is under Marik's control (which is whenever he is not standing motionless) a gold Eye of Wdjat appears on his forehead.

In Yu-Gi-Oh! Duel Monsters IV: Battle of Great Duelist, the Doll was shown in a different attire; a short-sleeved yellow shirt, and blue pants. This appearance was carried over for Yu-Gi-Oh! Nightmare Troubadour.

Strings was a mime that went mad after killing his parents, and sealed his own conscience away out of guilt. Eventually, he came into Marik's mind control, and due to his crushed mind, became very easy for Marik to bend to his will. Marik programmed Strings to kill Yugi at all cost should he win the Duel against him.

At first, he appears to be a stationary mime in the park and is a curiosity for many of the people there, but when Marik takes control of him, he goes to confront Yugi and Duel him.

Strings has a huge advantage up his sleeve, the Egyptian God Card "Slifer the Sky Dragon". Using a five card combo involving "Slifer", "Revival Jam", "Infinite Cards", "Jam Defender", and "Card of Safe Return", Strings puts Yami in a tight situation. Every time he attacks, Strings can redirect the attack to "Revival Jam", which regenerates itself after being destroyed and thanks to "Card of Safe Return", he draws three cards from his Deck whenever this happens and because of "Infinite Cards", he can hold as many cards as he wants. With the ATK and DEF of "Slifer" proportional to the number of cards its controller holds, and with "Revival Jam" able to absorb and reform from any attack Yugi is able to make with the aid of "Jam Defender", Marik boasts the strategy is unbeatable.

Yami is just about to give up until Kaiba arrives and encourages him to fight on. The two manage to figure out the weakness of this combo and turn it against Marik. Yami attacks "Revival Jam" with "Buster Blader", and then uses "Brain Control" to take control of "Revival Jam" as it regenerates so it regenerates under his control, forcing "Slifer" to attack it with its second mouth. Then "Revival Jam" is destroyed and regenerates, forcing Strings to draw three more cards due to "Card of Safe Return". Then "Slifer" must attack "Revival Jam" again, since it reformed under Yami's control, destroying it and allowing it to regenerate again, and forcing Strings to continue drawing due to "Card of Safe Return". This creates an infinite loop that only ends once Strings' Deck is empty, causing him to lose the Duel through a Deck Out. Yami gets "Slifer" for his victory.

Strings' only additional appearance was during Yami Marik's Duel with Mai Valentine at the Battle City Finals. After Marik's "Makyura the Destructor" was destroyed during their Shadow Game, Marik's memory of Strings was erased, though Marik declared that no one in his mind was worth remembering anyway.

Strings himself is entirely devoid of personality, and is merely a shell for Marik's will. This worked to Marik's advantage: since the Egyptian Gods normally do not obey one without a Millennium Item, Strings' empty mind allowed Marik to bypass this restriction: "Slifer" obeyed Marik's will, though Marik didn't have to be there in person. However, Strings' lack of mental awareness also served another end: he had no conscience and could feel no pain, so would hold nothing back. After Strings' loss to Yugi, Marik decided to talk through Strings one last time then released control of him and he collapsed.

The Doll appears under Marik's control, as in Battle City in Yu-Gi-Oh! Duel Monsters IV: Battle of Great Duelist, in which the player will have to fight against Slifer the Sky Dragon. Strings also appears as a Duelist in Yu-Gi-Oh! The Eternal Duelist Soul, Yu-Gi-Oh! Worldwide Edition: Stairway to the Destined Duel, Yu-Gi-Oh! The Sacred Cards, Yu-Gi-Oh! Dawn of Destiny, and Yu-Gi-Oh! Nightmare Troubadour (lacking "Slifer" in his Decks). When not under Marik's control, Strings is only capable of communicating basic sentences (sometimes not speaking at all). 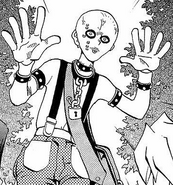 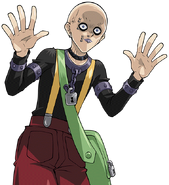