This Deck is loosely based on Starter Deck: Kaiba, but replaces some of the contents with more advanced cards, which includes some other cards Kaiba used, cards that help to advance his "power" theme, as well as including some generic useful cards that he never used, e.g. "Jar of Greed" and "Dust Tornado".

Seto Kaiba's appearance on the cover of this product is taken from the title page for Yu-Gi-Oh! Duelist Duel 126: "Awaken the Gods!!", albeit with minor changes in detail.

Each Starter Deck: Kaiba Evolution contains 50 cards in total. The number of card of each rarity are as follows: 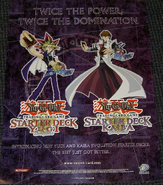