Speed Duel (スピードデュエル Supīdo Dyueru) is a beginner format that was used in Yu-Gi-Oh! Official Card Game. It is easy to experience and recommended for players to remember the basics on how to play the game. This concept was first introduced in the "Duel Terminal" system under a different ruling system. It was later used as the main gameplay of Yu-Gi-Oh! Duel Monsters Saikyo Card Battle and Yu-Gi-Oh! Duel Links. There is a format exclusive to the Yu-Gi-Oh! VRAINS anime, for a Duel taking place in the Data Storm in LINK VRAINS.[1][2]

The Booster Packs tend to use the names of episodes from the anime. 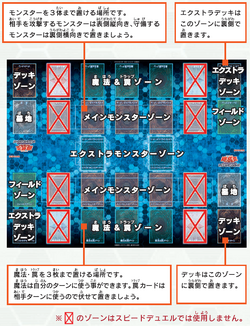 In the Yu-Gi-Oh! VRAINS anime, the Speed Duel is a common-used format.

Speed Duels were legendary Duels played in LINK VRAINS where players use D-Boards to ride the Data Storm. This kind of Duel had disappeared for many years when the Data Storm apparently ceased to exist, making Speed Duels be only known as rumors. However, when Yusaku Fujiki captured Ai, the latter released the Data Storm, thus reviving these Duels.[2]