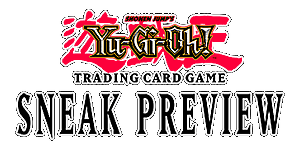 A Sneak Peek event, also known as a Sneak Preview, was an event held at Konami's Official Tournament Stores to celebrate a new TCG booster pack, occurring the weekend before the new packs are sold. A new TCG booster pack is released every three months.

At the 20th January 2020, Konami Germany announced that Sneak Peeks will be discontinued and that the Sneak Peek of Ignition Assault will be the last Sneak Peek. Beginning with Eternity Code, the Pre-Release events will be the replacement.

Galactic Overlord
Add an image to this gallery

Lord of the Tachyon Galaxy

Judgment of the Light

Code of the Duelist
Add an image to this gallery

Retrieved from "https://yugioh.fandom.com/wiki/Sneak_Peek?oldid=4343315"
*Disclosure: Some of the links above are affiliate links, meaning, at no additional cost to you, Fandom will earn a commission if you click through and make a purchase. Community content is available under CC-BY-SA unless otherwise noted.