View source
watch 02:56
Raise a Floppa - The Loop
Do you like this video?
Play Sound
For the Yu-Gi-Oh! 5D's character, see Syd Barlow.

Sid, known as Takaido in the Japanese version. Along with Bonz and Zygor, he is one of Bandit Keith's former henchmen. In the dub, he has an Australian accent.

In the Duelist Kingdom tournament, they meet up Bandit Keith, who agrees coach them through the tournament so all four of them will advance to Pegasus' castle. Keith wanted revenge at Maximillion Pegasus for humiliating him in the final match of the Inter-continental Championship. While helping them win Duels the first day of the tournament, Keith secretly intends to use them for their Star Chips. When Keith finds out about Yugi Muto, Joey Wheeler, and the rest of the gang, they believe they will get in their way, and seek to eliminate them. When Joey runs away from the group towards a waterfall, Zygor beats him unconscious and he wakes up in cave with a Dueling Arena, complete with a Graveyard Field. Bonz challenges Joey to a Duel that he tricks him into thinking he must accept. Bonz has the upper hand, as his Zombie-Type monsters gain a 30% ATK and DEF bonus because of the Graveyard Field, and when they are destroyed, they just regenerate, and become even stronger from "Call of the Haunted". However, when Yugi and the gang arrive, Joey manages to figure out the Zombie's main weakness and that is their DEF is 0. Using "Shield & Sword" to switch their ATK and DEF values, Joey wins the Duel. Bandit Keith then locks the gang in, and turns on his own companions. Since Sid and Zygor had five Star Chips each, Bandit Keith takes them from them (along with a Dueling Gauntlet) after beating up Bonz for losing. With those ten Star Chips, he becomes the first to qualify for the finals.

Sid, Bonz and Zygor are then seen right before the Battle City finals. The three reside in a nearby cemetery and trick people into giving up their Locator Cards. However, Yami Bakura is not intimidated by their act and challenges them to a Duel in which the winner gets all the Locator Cards, and thus goes directly to the Battle City Finals. Bakura wins in just a few moves, and then banishes them to Hell (the Shadow Realm in the dub). 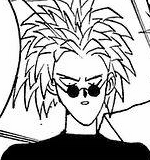 Sid's only shown card in the anime is "Firewing Pegasus", which was seen on the screen of Seeker's laptop as he was searching for Duelists and their rarest cards.[2]

*Disclosure: Some of the links above are affiliate links, meaning, at no additional cost to you, Fandom will earn a commission if you click through and make a purchase. Community content is available under CC-BY-SA unless otherwise noted.
... more about "Sid"
RDF feed
Anime appearances
Yu-Gi-Oh! (anime) +
English name
Sid +
Gender
Male +
Manga appearances
Yu-Gi-Oh! Duelist +
Advertisement