View source
watch 02:19
Wiki Targeted (Games)
Do you like this video?
Play Sound
For the manga version of this character, see Shadi Shin.

"Shadi" (شادي) is a name used in Arabic-speaking countries as well as in the Indian subcontinent. The name is traditionally given to Arab Christian and Muslim males. The word "Shadi" is of Arabic origin and has the archaic meaning of "singer" although that is no longer its use nowadays.

It also means someone who seeks knowledge of science and literature. which makes his name also means disciple as it also, comes from the root of "shudda" (شَدَّ) which means to be exaggerating on something like being too harsh on someone or something. and in case of "Shada" (شادَ) it means to build.

Shadi was killed by Yami Bakura at least 5 years before the present day events of the series,[1][2] which meant that Shadi was a disembodied spirit and insubstantially incorporeal ghost normally whenever the characters encountered him. However, such as when saving Tristan and Duke's lives from falling off Seto Kaiba's Blimp, Shadi did have the power to become substantial for a short time. In the dub, he was killed by Bandit King Bakura millennia ago.

Shadi had guarded the tomb where the seven Millennium Items were once kept. Shadi forcefully gave the Millennium Eye to Maximillion Pegasus, after Pegasus saw him punish a Grave Robber with the Millennium Ring. Shadi was the apparent guardian of the Tomb.

Shadi appeared before Yugi Muto in Duelist Kingdom and entered his mind. Shadi found that Yugi's soul had been divided into two Soul rooms. One of them was for Yami Yugi and the other was for Yugi. Shadi entered Yami's mind to find any clues that might lead him to the thief who stole Pegasus's Millennium Eye (Yami Bakura). As Shadi attempted to find any clues, he was attacked by multiple traps in the Pharaoh's mind. Shadi almost met his end, but was rescued by Yugi. As both attempted to find clues to the thief of the Millennium Eye, they were attacked by Dark Magician who emerged from a stone tablet. Shadi was standing on a stone tablet of the Blue-Eyes White Dragon and attempted to defend him and Yugi by summoning the dragon. However Yugi reasoned with the Dark Magician and convinced the magician to call off his attack, much to Shadi's amazement. Shadi then suspected that Yugi was the chosen one. Once Shadi exited Yugi's mind, he apologized for the intrusion. He then warned Yugi to be careful and watch out for the thief. Before he dispersed, Yugi asked for his name and Shadi told him.

Shadi appeared once again during Battle City; he appeared and saved Tristan and Duke, whom had gotten into a fight over Serenity and were forced to hang onto the end of the blimp for their lives.

Later, Shadi appeared to Yugi and warned him about all seven Millennium Items being aboard Kaiba Craft 3 and were used during the Battle City Tournament. Then, he explained to Yugi how Pegasus came across the Egyptian Gods and recreated them as Duel Monster cards. He then told him of the curses that came afterwards which caused the death of everyone involved in the production of the Gods (whereas they vanished without a trace in the English Version), and that Pegasus was forced to return them to the tomb where he discovered the Gods. Shadi then met up with Ishizu Ishtar to discuss the evil within Marik that was growing (Yami Marik) and must be stopped. He then vanished once again.

Shadi helped Yami Yugi during the Dark RPG. He appeared in front of the stone tablet which bore the image of Priest Seto and Pharaoh Atem. Tristan was able to recognize him and pointed out that Shadi was the one who saved him and Duke during the Battle City Tournament. Using the power of the Millennium Key, Shadi got Yami Yugi's friends into the Millennium World through Yami Yugi's memory. When Pharaoh Atem was about to be killed by Zorc Necrophades, Shadi possessed the body of Hasan to help Atem during his fight with Zorc. However, he met his destruction with a blast from the evil being.

After the Dark RPG and the Ceremonial Battle, Atem proceeded to his afterlife, and the seven Millennium Items were destroyed. While the tomb was crumbling and the people had left the main chamber, Shadi's spirit had appeared and disappeared one last time; he was finally able to rest in peace in the spirit world. 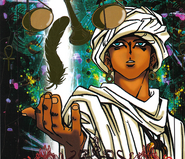 Shadi (Legacy of the Duelist)

Shadi appeared in Yu-Gi-Oh! Forbidden Memories, in the future to help Yugi talk to his ancient self and find a way to release him.

Shadi faced Yugi during the Kaiba Corporation Tournament. After he lost, Shadi's Millennium Key and Scale were drawn into two of the Millennium Item Cards.

Although he was not a Duelist in the anime or the manga, Shadi Dueled throughout various video games. In those cases, he played an Ancient Deck, which featured cards, such as "Millennium Golem" and "Sengenjin".

Balance On The Edge
Monsters

*Disclosure: Some of the links above are affiliate links, meaning, at no additional cost to you, Fandom will earn a commission if you click through and make a purchase. Community content is available under CC-BY-SA unless otherwise noted.
... more about "Shadi"
RDF feed
Anime appearances
Yu-Gi-Oh! (anime) +  and Yu-Gi-Oh! Capsule Monsters +
Arabic name
شادي +
English name
Shadi +
Gender
Male +
Advertisement