View source
watch 02:52
Roblox: DeepWoken - The Loop
Do you like this video?
Play Sound
"Shizuka" redirects here. For the card, see "Shizuka the Heavenly Dancer".

Goddess with the Third Eye

Serenity Wheeler, known as Shizuka Kawai in the Japanese version, is Joey Wheeler's younger sister. The two were separated at a very young age when their parents got divorced. Serenity is depicted as being a sweet-natured, gentle, fragile and dependent young girl. She has a small fragile body, flowing auburn (brown/red) hair, and gentle green eyes. Throughout the whole series she is pictured as gentle but strong, with a never changing attitude of high spirits.

Serenity wears light blue denim shorts and long white socks with blue sneakers. Her top is a sleeveless pink and white shirt with a high collar that is worn on top of a short-sleeved yellow shirt. She does not change this outfit throughout the series except when she is in the hospital, where she wears simple pink pajamas. The photo Joey Wheeler has of her in his wallet shows her dressed in a sailor fuku common to middle school students in Japan. In the Japanese version of the final episode's end credits, she wears a white shirt with some pink linings around the edge of its collar, sleeves and bottom, and a orange short skirt. In the manga, she wears longer sleeves and jeans rather than the shorter clothes that she wears in the anime. She has auburn hair with long bangs framing the sides of her face and a cowlick of four small hairs that cover the middle part of her forehead. She has greenish brown eyes.

Serenity is a gentle-natured and compassionate girl who is rather shy, fragile, vulnerable, and emotional. This may be the main reason why her big brother Joey always looks after her. She is also shown to be extremely trusting to the point of naivety, believing Tristan when he says, in an attempt to impress her during her recovery from her operation, that he taught Joey everything he knows about Duel Monsters. However Serenity has shown to have her own inner strength, such as when she took off her bandages to see for the first time, to save Joey by diving into the water. Serenity also, after an inward struggle of self blame, was the key to defeating Nezbitt and she pulled through. Optimism seems to be one of her key features, which one would need to survive nearly going blind, being aware she may not get the operation. (Prior to Duelist Kingdom.) Serenity was separated from her older brother Joey to live with their mother when their parents divorced, but they seemed to have kept in contact over the years, as Serenity looks up to him and they both love each other dearly; during Duelist Kingdom Joey is seen to have a picture of her in his wallet. Joey often states that Serenity was his biggest inspiration throughout Duelist Kingdom and Battle City. She shares a strong bond with Téa Gardner and Mai Valentine, and Téa even takes her sight-seeing at one point.

Serenity's character is portrayed as a very beautiful young girl, capturing the romantic interests of both Tristan and Duke. This leads them to constantly argue over her during the Battle City arc and both eventually end up giving her their number. It is never shown if she ever liked either of them as more than friends, though she is always amused at their antics and even looks relieved at one point where Tristan drags Duke away from her. But she did seem to be more fond of Tristan than of Duke. Her innocent nature was even able to make one as self-centered as Seto Kaiba be considerate enough to get medical help for Bakura even during the Battle City tournament.

In the sub during Joey's Duels with Odion and the Big Five she expresses concern and even a bit of frustration at Joey's antics (when Joey drops his starting hand and when he begins freaking out over Yugi's "obvious trap" respectively), commenting "sheesh", before switching to an encouraging "nice catch", which the gang reacts to with dismay. In the latter she comments, "I wish my big brother would take this more seriously". In the sub during her day out with Tea, after Tea responds that she is sort of running late for her meeting with Yami Yugi, she responds with concern "don't 'sort of' me". The dub tones most of this instances down and even changes one of them in the Odion duel to her dismay being toward the gang not offering Joey support.

In the dub it was Serenity who convinced Mai to prank the gang, while in the sub it was Mai who asked her to play along, with Serenity sticking with tongue out with a laugh and telling Joey she is sorry, something she also does when curiously asking Ishizu to use the Millennium Necklace to find out if Joey will face Yami Yugi or Yami Marik in the final rounds, to which Joey reacts negatively, prompting her to giggle.

In the dub of her tag duel against Soichiro Ota/Nezbitt, she picks up a little bit of her big brother's attitude, calling Nezbitt "metal-mouth".

Shizuka is written with the kanji for "silence" and "fragrance", while Kawai means "cute". Serenity was chosen likely to the similarity to her Japanese name in meaning.

Serenity and Joey were separated when she was only seven years old due to their parents' divorce, and Serenity went to live with her mother who was working as a nurse while Joey stayed with his father who was an alcoholic gambler.

Joey receives a video tape from Serenity. In it, she tells him that time is running out for her because she needs an operation to repair her eyesight or else she will go blind. The operation, however, is very expensive and to pay for it, Joey needs to win the three million dollar prize at the Duelist Kingdom tournament. Despite not having an invitation, Joey is allowed on the ship after Yugi gives him one of his Star Chips. Yugi also gives the three million dollars he won to Joey so he can pay for Serenity's eye operation.

After her operation, Battle City begins. Serenity spends most of the tournament in the hospital recovering with Tristan taking care of her. She finally removes the bandages around her eyes and sees clearly for the first time when the entire gang is sent to the Domino Pier, where Yugi and a Marik Ishtar-controlled Joey are Dueling. After Joey breaks free from Marik, he and Yugi are dragged into the ocean. Joey sets Yugi free from his shackles and Serenity dives in with the key for Joey's chains and saves him. In the manga Shizuka is present, but Joey Wheeler is instead rescued by Kaiba, who simply drops the key needed into the water. Afterwards, she hangs out with the gang for the finals and becomes friends with Mai Valentine and Téa Gardner, who both treat her like a younger sister.

Serenity's role is probably more prominent in this arc than in the others. During the Virtual World arc, she is rescued from a Mad Sword Beast by Tristan Taylor and Duke Devlin. She duels once alongside Tristan and Duke against Nezbitt, a member of the Big Five, but is not very experienced. Tristan loses the duel to protect her, sending her into a state of shock, feeling responsible for getting him involved in the first place. After a pep talk from Joey and Duke she regains her confidence and, reflecting on the basic rules she learned from Tristan earlier, barely wins, with her making the move that defeats Nezbitt. Throughout the rest of the arc she looks after Tristan who is in the form of a robot monkey since he had lost his body in the duel.

Serenity was in charge of taking care of Mai Valentine, who was unconscious after losing to Yami Marik. During Joey's Duel she was asked by Ishizu Ishtar to go and see the Duel while she took care of Mai, but when she arrived, Joey fainted and lost the Duel. When the tournament ended, she went back to Japan.

One day, Téa was walking through Domino City and met with Serenity. Téa showed the city to Serenity, explaining where some Duels and other important events took place.

Serenity wasn't seen in the Waking the Dragons arc, but Joey calls her to say goodbye before he goes to California and she appears in a montage narrated by Maximillion Pegasus just before the Ceremonial Battle, as Pegasus says that everyone whom Yugi and his friends met was destined to play a role in his journey. She is not seen again until the last episode during the Japanese version's end credits, though in the Japanese version, she is mentioned by Tristan saying greetings to her in the Grand Championship arc when he realizes he is on live TV. Duke, in the dub, mentions that he would be around Joey and Serenity's neighborhood for an upcoming date, possibly meaning that Serenity and Joey started living together again. 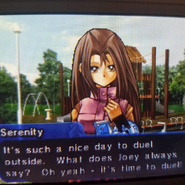 Her Deck is comprised of EARTH and LIGHT female monsters that she thought looked cool. The deck seems to have a Christian motif ("The Forgiving Maiden" and "St. Joan" are based on Christian figures). Serenity only dueled once, in a three on one Duel with Tristan and Duke against Nezbitt during the Virtual Realm arc. Most of the cards in her Deck are from Labyrinth of Nightmare and Legacy of Darkness. In the Japanese version she mentions choosing cards that are cute (episode 106).

Despite being a novice at dueling, she has shown to be relatively competent as she has observed several duels and was also pseudo-taught by Tristan during friendly talks. She was aware of key concepts like Defense Position which she tried to use but failed to (mostly because she was unaware that it required the cards to be put in a specific way), although this means she has a good assessment of the situation. She also knew how to perform a Fusion Summon which eventually granted her victory against Nezbitt.

In Yu-Gi-Oh! Nightmare Troubadour, she uses a Deck with a similar theme, titled "Cute Sister".