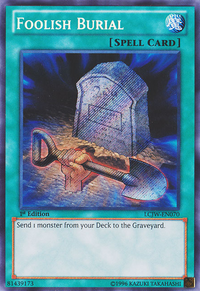 Cards can be sent to the Graveyard in many ways:

Tribute, destroy, discard and detach are different ways of sending cards to Graveyard.

Likewise, cards sent from the field to the Graveyard are not necessarily destroyed. For example, the effect of "Dark End Dragon" sends monsters to the Graveyard, so it cannot be negated by "Stardust Dragon", "My Body as a Shield" or "Destruction Jammer". However, doing so will activate the effects of "Sangan" and "Dandylion", as they activate when sent to the Graveyard, weither they were destroyed or not.

Acts the do not considered as Sending

Swapping the Main Deck with the Graveyard for the effect of "Exchange of the Spirit" is not considered sending to the Graveyard.

Retrieved from "https://yugioh.fandom.com/wiki/Send?oldid=3745230"
*Disclosure: Some of the links above are affiliate links, meaning, at no additional cost to you, Fandom will earn a commission if you click through and make a purchase. Community content is available under CC-BY-SA unless otherwise noted.