Scud is a playable Legendary Duelist in Yu-Gi-Oh! Duel Links. This is a video game depiction of Scud, a character from the Yu-Gi-Oh! The Dark Side of Dimensions film.

He appears in-game after the player claims his Character Unlock Mission reward for banishing opponent's cards 300 times with Card Effect.

Yellow keys are required to duel Scud at the Gate. 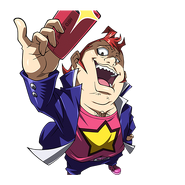 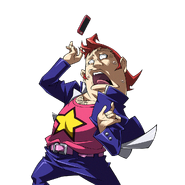 As Domino High School's resident bully, Scud and his cronies film their victims and upload the footage on the internet.

The Most Terrifying Stream Ever (incomplete)
Monsters

The following lists are the rewards the player accumulates from having Scud reach a certain Level.

When dueling against Level 40 Scud, these are the only cards that can drop; at lower levels, cards from the standard pool for Legendary Duelists may also drop.

*Disclosure: Some of the links above are affiliate links, meaning, at no additional cost to you, Fandom will earn a commission if you click through and make a purchase. Community content is available under CC-BY-SA unless otherwise noted.
... more about "Scud (Duel Links)"
RDF feed
English name
Scud +
Gender
Male +
Video game appearances
Yu-Gi-Oh! Duel Links +
Advertisement