View source
watch 02:17
New Pokemon Games - The Loop
Do you like this video?
Play Sound
For the Yu-Gi-Oh! ARC-V character, see Sam (ARC-V).

Sam, known as Tom in the manga and Japanese version, is an amateur Duelist Maximillion Pegasus used to humiliate Bandit Keith.

Sam was present at the Intercontinental Duel Monsters Tournament in New York City, having learned to play Duel Monsters the week before.[2]

At the start of Pegasus' Duel with Bandit Keith, Pegasus scanned Keith's mind with his Millennium Eye. He wrote down some instructions on a piece of paper and called Sam over. Using the instructions provided to him, Sam defeated Keith in a single turn.[2] 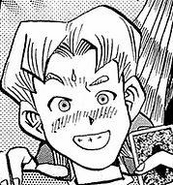 *Disclosure: Some of the links above are affiliate links, meaning, at no additional cost to you, Fandom will earn a commission if you click through and make a purchase. Community content is available under CC-BY-SA unless otherwise noted.
... more about "Sam"
RDF feed
Anime appearances
Yu-Gi-Oh! (anime) +
English name
Sam +
Gender
Male +
Japanese translated name
Tom +
Advertisement