Yu-Gi-Oh! Rush Duel (遊戯王ラッシュデュエル, Yū☆Gi☆Ō Rasshu Dyueru), or Rush Duels for short, is a card game introduced in Japan alongside the Yu-Gi-Oh! SEVENS anime series.[1] It is currently exclusive to Japan.[2] 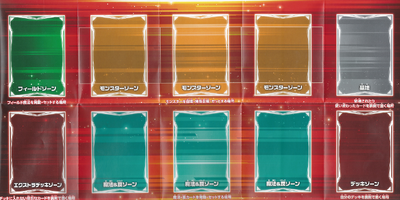 The rules for Rush Duels share some similarities to those of Speed Duels, but have additions of their own. These rules are the primary differences that Rush Duels were advertised as having:

Other differences in rules include:

Similar to the TCG's Speed Duel format, only cards produced for Yu-Gi-Oh! Rush Duel products will be legal in Rush Duels.[5]

Rush Duel cards use a new layout that is intended to be simple to understand and attractive to the eye. The art frames and effect text boxes are both significantly larger; the Level has been altered to a number over the Level star graphic and moved above the Type line alongside the ATK and DEF values, and the cards have "RUSH DUEL" printed at their base.

The following sets contain cards that can be used in Rush Duels:

In the Yu-Gi-Oh! SEVENS anime, Rush Duels were created by main protagonist Yuga Ohdo as an alternative format that anyone can enjoy, in contrast to the "rigid and uncool" Duels run by adults.[6]

Retrieved from "https://yugioh.fandom.com/wiki/Rush_Duel?oldid=4338201"
*Disclosure: Some of the links above are affiliate links, meaning, at no additional cost to you, Fandom will earn a commission if you click through and make a purchase. Community content is available under CC-BY-SA unless otherwise noted.