Yu-Gi-Oh! Stairway to the Destined Duel

Roland, known as Isono in the Japanese version, is one of the Battle City tournament officials. He appears to be Seto Kaiba's right-hand man and business adviser, as he helps Kaiba manage KaibaCorp. During KaibaCorp-sanctioned tournaments, he also serves as the MC (Master of Ceremonies).

He is shown to have a special bond with Kaiba. When KaibaCorp is taken over by Dartz and Roland asks Kaiba what to do, Kaiba answers with “Why do you care? I’m no longer your boss”. But Roland stands up and says that he’ll stand by him until Kaiba Corporation is his again.

In the English dub, Fuguta is once incorrectly called Roland by Mokuba.[2]

He and Fuguta greeted Sartorius and escorted him to a meeting with Kaiba.[4] 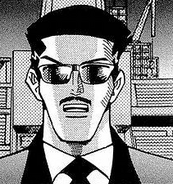 Isono (manga and The Dark Side of Dimensions)

*Disclosure: Some of the links above are affiliate links, meaning, at no additional cost to you, Fandom will earn a commission if you click through and make a purchase. Community content is available under CC-BY-SA unless otherwise noted.
... more about "Roland"
RDF feed
Anime appearances
Yu-Gi-Oh! (anime) +  and Yu-Gi-Oh! GX +
Arabic name
رولاند +
English name
Isono +  and Roland +
Gender
Male +
Video game appearances
Yu-Gi-Oh! Stairway to the Destined Duel +  and Yu-Gi-Oh! Nightmare Troubadour +
Advertisement