Ritual Spell Cards (Japanese: カード Gishiki Mahō Kādo), known as Ritual Magic Cards in the TCG prior to Magician's Force and the OCG, are a type of Spell Card used to Ritual Summon Ritual Monsters.

Ritual Spell Cards typically require the following conditions to be met in order to be activated:

Ritual Spell Cards tend to be demanding to use, due to their highly specific activation requirements and heavy cost, and for that reason they are arguably the least used type of Spell Cards. To make up for these design flaws, they contain numerous generic support cards to search them, such as Pre-Preparation of Rites, Manju of the Ten Thousand Hands, and Herald of the Arc Light.

Historically, "Advanced Ritual Art" was often used over other Ritual Spell Cards due to its ability to use monsters from the Main Deck instead of the field or hand. While the aforementioned generic support cards have made it less necessary, decks like Blue-Eyes Chaos MAX Dragon OTK still utilise it for its synergy with Normal Monsters.

Some Ritual Spell Cards, such as those for "Divine Grace - Northwemko" and "Garlandolf, King of Destruction", "Ritual of Grace" and "Ritual of Destruction" respectively, have secondary effects that can be activated by banishing the Ritual Spell Card from the Graveyard. Gishki Aquamirror infamously allowed itself to be returned to the deck to recover a Gishki Ritual Monster from the graveyard, allowing for GishKill FTK to become possible; this would lead to the introduction of the "hard" once per turn restriction on modern cards. When the Nekroz archetype was released, graveyard effects on Ritual Spells became a staple in their design, with each of the Nekroz Ritual Spells having the ability to banish themselves and a Nekroz Ritual Monster to get another Ritual Spell. 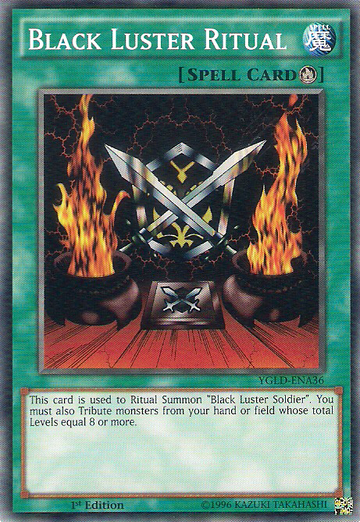