Rex Raptor is a playable Legendary Duelist in Yu-Gi-Oh! Duel Links. This is a video game depiction of Rex Raptor, a character from the Yu-Gi-Oh! anime.

He appears in-game after the player reaches Stage 20 of Duel World (DM) and can be unlocked as a playable character starting at Stage 21.

Yellow Gate Keys are required to Duel Rex Raptor at the Gate.

The special event Roaring Rex has Rex uses different Decks and drops different rewards than the one he drops at the Gate.

A skilled Duelist who finished second in the Regionals, Rex Raptor's strategy focuses on having his Dinosaurs stomp all over his foes with an aggressive offense. His prized possession is the rare "Red-Eyes B. Dragon," which he spent his lifetime to obtain.

After the player advances to Stage 20, they will encounter Rex for the first time, who will be taunting Josh in the middle of their Duel. Shortly afterwards, Rex defeats Josh with an attack from his "Two-Headed King Rex", before proceeding to tell the player that his "prehistoric pals are not to be messed with," and that his monsters will lead him to the top of the "kingdom."

Until the player defeats Rex for the first time, whenever they challenge Rex to a Duel, he will be mildly surprised and rhetorically ask the player if they want to Duel against his dinosaurs. He goes on to admit that he's impressed by the player's guts in challenging him, but also warns the player that his "prehistoric predators" are "ginormously powerful." Rex then prompts the player to Duel, before declaring, "My Duelin' dinos will tear you to shreds!"

Upon Rex's first defeat, he briefly expresses surprise, before attempting to save face by claiming that he only lost because he went easy on the player, despite admitting he had said that he wouldn't. After an awkward pause, Rex swears that he won't let the player win the next time, saying that his dinos won't go extinct again and that the player can't fossilize them forever.

After the player redeems their final unclaimed reward for Rex Raptor's Character Unlock Missions, they will encounter Rex again, who brags that he finished second place in the Regionals with his skills - specifically, skills that he'll now use to defeat the player. He then warns the player that if they think of him as a one-trick pony with his dinosaurs, they're making a big mistake, as Rex immediately reveals his "Red-Eyes B. Dragon" card to the player. He chuckles, and claims that he sees the player quaking in their boots. Rex then admits that although "Red-Eyes B. Dragon" isn't a dinosaur, it's as strong as any of them, and that it will stomp the player flat, before he bursts into laughter. 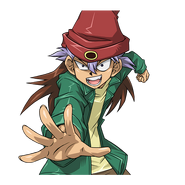 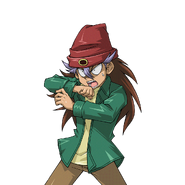 Set Sail for the Kingdom

The following lists are the rewards the player accumulates from having Rex Raptor reach a certain Level.

When dueling against Level 40 Rex Raptor, these are the only cards that can drop; at lower levels, cards from the standard pool for Legendary Duelists may also drop.

When dueling against Level 40 Roaring Rex, these are the only cards that can drop; at lower levels, cards from the standard pool for Legendary Duelists may also drop.