Rebecca Hawkins, known as Rebecca Hopkins in the Japanese version, is a character in the Yu-Gi-Oh! second series anime. She is an original character created for the anime and does not exist in the manga.

Her appearance in this arc is different from her appearance in Waking the Dragons. She still keeps the short skirt, but wears thigh-high socks to cover her legs. She also wears a light blue top over a grey T-shirt and reverted back to having two pigtails. She has blue eyes, light blonde hair and light pale skin.

She was very rude and mean at first when meeting new people such as Yugi. She also looked down on ranks as second rank wasn't that important to her but she only cared about first place. She also use to talk to a stuffed teddy bear that she calls Teddy. However she starts to be kindly to Yugi and his friends. She even has a crush on him and fights Vivian Wong for his affection. Rebecca doesn't really seem to fight Tea for Yugi's affection as she can tell that Tea (in the Japanese version) has a crush on Yami Yugi.

Rebecca is the granddaughter of Arthur Hawkins, an old friend of Yugi Muto's grandfather, Solomon Muto. Rebecca encountered Yugi as he returns from Duelist Kingdom. She accused Solomon of stealing her grandfather's prized "Blue-Eyes White Dragon" and demanded he Duel her for it, when asked about how she knew that Solomon "stole" the card, she replies that Bandit Keith told her. As he was recently discharged from the hospital, Solomon cannot Duel, so Yugi Dueled Rebecca in his place.

While they Dueled, Solomon recounted how he met Arthur, an archaeologist who believed that the ancient Egyptians played an ancient form of Duel Monsters. Arthur's colleagues laughed at his strange ideas, and he set out on an expedition with Solomon to find proof. They were trapped when a tomb caved in, and as there were only enough supplies for one person to live, they Dueled for them. Now, Yugi and Rebecca are fighting, card for card, the very same Duel, and Solomon claims he knows how it will end.

Rebecca discarded various monsters to her Graveyard to power up her "Shadow Ghoul" monster, and Yugi conceded defeat. Rebecca demanded the card, but Solomon reveals it was destroyed. An angry Rebecca yelled at Solomon (unaware that it was really Seto Kaiba that destroyed it) until Arthur arrived, telling her to behave. He showed Rebecca the card Yugi had drawn before he forfeited. That card was "Soul Release", which would have allowed Yugi to remove five monsters from her Graveyard, thus weakening the "Shadow Ghoul" just enough for Yugi's "Dark Magician" to destroy it. Yugi admitted that he surrendered on purpose, just as his grandfather did to let Arthur take the last of the water that they had. When they were rescued, Arthur was so grateful that he gave his "Blue-Eyes" card to Solomon. After learning about the story, Rebecca quickly apologized for being mean to Yugi and not listening to his side of the story. Yugi gave Rebecca his "The Ties of Friendship" as a reminder of this lesson, which she kept ever since.

She and her grandfather returned in the Waking the Dragons arc to help Yugi and his friends against Dartz. Here, Rebecca appears noticeably older-looking and wearing glasses (to the point that everyone barely recognizes her) and is also in college — much to the shock of Yugi and the gang.

She helped by researching Dartz’s Three Swordsmen and hacking into KaibaCorp’s computer system to track others via their Duel Disks. She also seemed to be slaving under the delusion that Yugi was her "boyfriend" (her "darling" in the Japanese version, a reference to Urusei Yatsura) — something which made Téa Gardner jealous. This didn’t seem to be a pretend crush as she was devastated when Yugi's soul was taken and tried to defeat Valon in vengeance. However, she and Duke were defeated by Valon easily.

Later Yami Yugi apologized to her, and she said that to Yami Yugi that she won't forgive him for what happen to Yugi. She said to Yami Yugi, that he better bring Yugi back safely. She then helps Yami Yugi and Kaiba break in KaibaCorp to get something. She then wished Yami Yugi good luck for his duel with Dartz, while she say behind hoping that everything was alright.

After Dartz was defeated, the gang stayed with Rebecca and her grandfather for a while. Rebecca then took part in the KC Grand Championship, where she defeats Chinese champion Vivian Wong and Abe the Monkey Man. She lost to Leon von Schroeder in the semi-finals which she's greatly upset about it and she wanted a rematch with Yugi again. She spent the rest of the tournament cheering from the sidelines. She is absent after the tournament ended, telling Yugi that she will Duel him again one day, and telling Téa (with a coy look) that she will miss her.

In the Japanese version of the final episode, Rebecca made her final appearance by hugging Yugi at the airport while Tea glares at the scene. 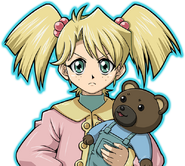 Initially, Rebecca was hostile to both Yugi and his grandfather, accusing them of stealing her grandfather's "Blue-Eyes White Dragon", but this conflict is resolved very quickly. However, during her second appearance in the Waking the Dragons arc, Rebecca announces that she is in college and has taken Yugi as her "boyfriend". Since then, Rebecca continues to express her romantic affection for Yugi, getting angry at Yami Yugi after his loss to Rafael. The two even share a bit of a moment at Rebecca's destroyed house. She also gets mad at Vivian when she tries to flirt with Yugi, and taunts her after beating her in a Duel. Then, during her Duel with Leon von Schroeder, she gets depressed when Yugi gets distracted by having to find his grandfather, who goes missing, and hugged him pretty much whenever she saw him.

Arthur is Rebecca's grandfather and she values his protection as much as he values hers.

Up until Season 4, Rebecca never really hung out with Téa, mostly due to her own accusations of theft towards Yugi Muto and his grandpa. In Season 4, she has a bigger bond towards her, even talking to her about her concerns regarding Yugi and Yami.

Generally, Rebecca never really showed any bonding with Joey, though she was often on the receiving end of his comments both from her first appearance and later appearance in Season 4.

To Rebecca, Vivian comes off as a rival of sorts, mostly due to Vivian's equal love of Yugi Muto. Whenever Vivian is around with Rebecca or vice-versa, Rebecca does not show any support for her, having already claimed Yugi for herself.

Rebecca originally utilizes her grandfather's Shadow Ghoul Deck, which she had inherited from him, focused around loading the Graveyard with Monster Cards through cards such as "Judgment Blaster" to power up her favourite monster Shadow Ghoul. In addition, she also uses a large quantity of cards which give her a hand advantage such as "Skelengel" and "Sangan". Solomon Muto, watching the duel between her and Yugi, thought about how their duel and the cards they played were an exact recreation of his past duel with Arthur.

In the Waking the Dragons arc, Rebecca played a Gem Dragon Deck.

During the Grand Championship, Rebecca uses a Gem Dragon/Anti-Cure Deck. Her main strategy is using "Fire Princess" along with "Marie the Fallen One" to constantly inflict damage. She also utilizes a large quantity of stall cards such as "Gravity Bind" and "Imperial Order".