View source
watch 02:17
New Pokemon Games - The Loop
Do you like this video?
Play Sound
This article is about the character. For the category of Monster Cards, see Searcher.

The Rare Hunter, named Seeker in the English versions of multiple video games and unnamed in anime and manga, was a member of Marik Ishtar's Rare Hunters organization. In the dub, Seeker would often liken a Duel for a rare card to a hunt, comparing his strategy of replacing cards to replacing weaker hounds with better ones.

Having been dispatched by Marik Ishtar after he was called by the Merchant that sold Joey Wheeler and Yugi Muto their Duel Disks, Seeker and two of his fellow minions ambushed Joey Wheeler and forced him into a Duel. Most of the Duel, he played cards in Defense Position, and used Graceful Charity to draw more cards. Joey kept up a constant offensive and initially did well (however, he gave up a chance to win the Duel with multiple monster attacks by Tributing them to Summon Red-Eyes Black Dragon), but Seeker was able to draw all 5 pieces of "Exodia" and claim an automatic victory. Upon his defeat, Seeker and his fellow Rare Hunters took Joey's "Red-Eyes Black Dragon" and beat him up.

At the opening of the Battle City Tournament, Joey tracks down Seeker without his robes, claiming he is able to identify him by his snake-like eyes. When Joey demands a rematch, he declines due to his lack of rare cards. The exchange catches the attention of Yami Yugi, who Duels in place of Joey, wagering his prized "Dark Magician". Joey tried to warn Yami of the Rare Hunter's strategy, but Yugi refused, believing it to be an unfair advantage (in the dub, Seeker claimed that he would tear up the "Red-Eyes" if Joey told). Yami figured it out on his own later, and used cards that would prevent Seeker from holding all the "Exodia" pieces in hand like "Time Seal" and "Lightforce Sword", taunting his opponent into making mistakes by observing that his reliance on his Exodia strategy meant that he had no actual plan and few alternative monsters that he could use if Exodia wasn't an option. Yugi finally destroyed Exodia by baiting Seeker into Summoning Exodia's head, allowing him to use "Chain Destruction". He then attacks Exodia's head, destroying it and every other version of it in Seeker's deck, then attacks Seeker's Life Points directly, reducing his life points to 0. Yugi also discovered that the Rare Hunter was using fake cards, and he destroyed them (in the dub, the cards were real, but marked with invisible ink).

At that moment, Seeker began writhing in pain; Marik had established mental contact with Seeker and wasn't too pleased that he lost. Using the Millennium Rod, Marik took over Seeker and used him as speaker to talk to Yugi. He stated that this Rare Hunter was the weakest of his minions and warned Yugi of future Duels before making Seeker fall unconscious (in the English dub, the Rare Hunter's mind was banished to the Shadow Realm).

Seeker appeared as one of the many lost souls that sought revenge on Yami when he entered the Stone Wasteland to find the spirit of Yugi. 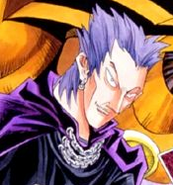 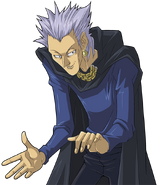 Seeker (Legacy of the Duelist)