Raijinhai (雷神牌) is a game from the Toei Yu-Gi-Oh! anime, where it is said to have originated in India. It is a guessing based game where two players use their pieces to eliminate the other's. The win conditions apparently vary, but three are presented in the show:

Pieces are chosen behind a screen and so the game is based on the player's knowledge of statistics as well as their application of psychology. Aileen Rao challenged Dark Yugi to a game with Anzu Mazaki's life on the line.

The pieces and what they do are as follows:

Raijin Indra
Strongest piece, can only be used once in a game

Queen
Can only beat king, destroyed by all others 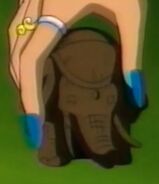 Elephant
Beats cavalry, soldier and queen, can use 2 in a game 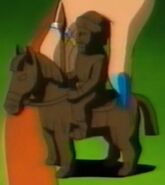 Cavalry
Beats soldier and queen, can use 2 in a game

Soldier
Destroyed by all except queen, can use 2 in a game
Add an image to this gallery
Retrieved from "https://yugioh.fandom.com/wiki/Raijinhai?oldid=3906678"
*Disclosure: Some of the links above are affiliate links, meaning, at no additional cost to you, Fandom will earn a commission if you click through and make a purchase. Community content is available under CC-BY-SA unless otherwise noted.