Raging Battle is a set in the Yu-Gi-Oh! Official Card Game (OCG) and Yu-Gi-Oh! Trading Card Game (TCG). is the fourth set of the OCG's 6th series following Crimson Crisis. It is followed by Ancient Prophecy.

This was the final Booster Pack to use AE in its Asian-English print set numbers.

In the Japanese version there are 5 cards per pack and 30 packs per box.

The OCG set includes 80 cards. This is comprised of:

In the TCG there are 9 cards per pack and 24 packs per box. The set contains 100 cards or 111 in the Master Set. This is comprised of: 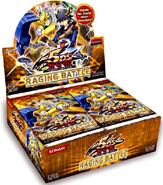