View source
watch 02:34
Fire Emblem Warriors: Three Hopes - The Loop
Do you like this video?
Play Sound
For other versions of this character, see Rafael (disambiguation).

Rafael is the strongest of Doma's Swordsmen and the most mysterious in his strategy. Stoic and mature, he took up the mantle of taking the Pharaoh's soul for Doma. He treasures his Guardian monsters and hates to see them in the Graveyard. He is the first Duelist to defeat Yami Yugi without cheating.

Rafael's usual outfit consists of a large open full-body coat with padded shoulders and belted sleeves and fingerless gloves with studded knuckles. His blonde hair is raised and points upwards behind his head it also features two locks in front of his ears turning through ninety degrees and pointing forward. His Orichalcos Stone is worn around his neck. He carries a Chaos Duel Disk on his left hand.

Rafael came from a very wealthy family, and led a perfect life. He had a younger sister and a younger brother, Sonia and Julian. During his birthday when he received his gift of "Guardian Eatos", Rafael was separated from his family, on a luxury cruise, the boat went off course and directly into a tidal wave. As a result the family was killed and he was the only survivor (in the dub the story was changed to say that the family survived and had forgotten about him). In the Japanese version, Rebecca stated that when she became the American champion, there were rumors that it was actually Rafael instead, even though he never participated in public Duels.

Rafael was stranded on a deserted island with only his Duel Monsters, which included "Guardian Eatos", "Guardian Grarl", and "Guardian Kay'est", which he treasured. As the three years passed, he ended up gaining longer hair with his only clothing being a tank top and what's left of his pants. During this time, his cards blew into the ocean and Rafael dove in and retrieved them. It appears at this time he began to see his cards Duel Monster spirits, but it was never shown if they talked back to him. One day, Rafael saw a city right off the island. Upon building a raft, Rafael quickly sailed towards it. But as he got near, it disappeared and he was pulled down underneath the sea by a tidal wave. There, Dartz's voice told him to remember his voice for they would meet again. Rafael became conscious aboard his raft and was then rescued by a fishing boat where his rescue was on the front page of the magazine.

In the original, Rafael's parents were presumed dead as he visited their graves. His surviving relatives took his dad's inheritance and wanted nothing to do with Rafael. Meanwhile, strangers simply wanted his fame. As a result he had no real friends. Rafael made his living by becoming a Duelist, eventually becoming the first Duelist to become the first national champion in the United States, a feat that was believed to be accomplished by Rebecca. However, he never appeared in public outside of Duels since people simply wanted to take advantage of him. In the dub, his family survived but forgot about him.

He traveled more and eventually went with Dartz to a graveyard and tortured by digging where he finds the skulls from his siblings' corpses, confirming that his family had died in the shipwreck (the skulls were removed from the dub version). He was then seduced by a Dark Guardian and given "The Seal of Orichalcos" card and a Chaos Duel Disk, and became one of the many minions of Dartz. Rafael did not know that Dartz drove the ship that his family was separated from him on into the tidal wave til too late.

At some point after joining Dartz, Rafael met Alister and Valon. Like Rafael, Alister and Valon had their childhoods tragically manipulated and destroyed by Dartz. Rafael obviously cared a great deal about his partners as he showed concern for Valon after he fell in love with Mai and was visibly upset when Alister lost his soul.

Later in Florida, Rafael confronts Mai Valentine after she was freed from the Orichalcos's influence and arrived to defeat Dartz and free Joey's soul. Despite Mai's efforts, Rafael beats her and captures her soul. Rafael then Duels Yami Yugi again in order to take his soul, this time playing the Seal himself. After Yami Yugi defeats "Guardian Eatos", Rafael calls forth "Guardian Dreadscythe". Rafael proceeds to sacrifice his monsters, like Yami Yugi did in their previous Duel. Yami plays "Underworld Circle", sparking a vision of Rafael's past that snaps him out of the control of "The Seal of Orichalcos". After "Dreadscythe" was destroyed, Rafael then concedes defeat by using "Soul Charge" to revive all his monsters and deplete his own Life Points as a symbolic apology to them.

Afterwards the Seal attempts to take his soul, but his stone shatters and he is freed. It is revealed that because he had no negative emotions within him upon his defeat, the Seal could not take his soul. When the building starts collapsing, Rafael hangs from an edge and gives Yami Yugi a computer chip with a map to Dartz's lair before he seemingly falls.

He rescues Mai and Valon from the collapsing building and confronts Dartz, who confessed that he was the one responsible for sinking the luxury cruise that he and his family were on and for the suffering he and his friends had experienced all along. After this revelation, Rafael became shocked, distraught and enraged; unfortunately, these negative emotions allowed "The Seal of Orichalcos" to rematerialize around him. He used his remaining strength to materialize Guardian Eatos to attack Dartz, but the Seal claimed his soul before Eatos could do so.

At the end of the arc he is set free along with all of Dartz's prisoners. He is last seen standing before the Arc de Triomphe, presumably searching for his relatives.

Rafael is a powerful duelist, having skill comparable to that of Yami Yugi. Like Yami Yugi and Jaden Yuki, he has the ability to see Duel Monster Spirits outside of Solid Vision, making him even more connected to the monsters in his Deck. Like Yugi and Joey, Rafael's faith in his cards allows him to draw exactly the cards he needs to save himself, as he did in his first match against Yami Yugi.

Rafael uses a "Guardian" Deck. The majority of his cards are very old and worn, and can be seen with wrinkled edges and discolorations. However, the backs of the cards strangely remain undamaged. Their worn condition is a visual representation of Rafael's devotion to his cards. Not only does he refuse to replace the physical cards themselves, he refuses to let any of his monsters go to the Graveyard. Indeed, Rafael looks down on duelists who change their decks or sacrifice their monsters. This is further reflected in his dueling style, which prioritizes protecting his monsters over more strategically advantageous moves, utilizing cards such as "Rescuer from the Grave" and "Self Tribute". As seen with "Self Tribute", as well as "Aid to the Doomed" and the unplayed but seen "My Body as a Shield". He also has cards such as Monster Reborn and "Soul Charge" to resurrect his monsters should he fail to protect them.

Rafael's most common tactic is using "Guardian Treasure" to more quickly access his cards. His "Guardian" monsters rely on him first having the appropriate Equip Spell Card to be on the field before they can be Summoned, and he equips them to "Backup Gardna" for the purpose of the Summoning before using the ability of "Backup Gardna" to transfer that Equip Card to its corresponding "Guardian". Rafael is very close to his cards and cannot tolerate their destruction, thus using a variety of Spell and Trap Cards to protect them,

Rafael's dedication to protect his monsters is important due to his signature card "Guardian Eatos", which can be Special Summoned without any sacrifice if Rafael has no monsters in his Graveyard. When "Eatos" is destroyed in his Duel with Yami Yugi, Rafael Summons "Guardian Dreadscythe", a twisted evil incarnation of "Eatos" that represents the darkness in his heart. At this point, Rafael destroys his other Guardians to empower "Dreadscythe", his hatred and determination to defeat Yami Yugi overriding his bond with them. Furthermore, while Rafael would willingly sacrifice himself to protect his Guardians, "Dreadscythe" forces him to do so by making him discard a card to negate its destruction if it would ever be destroyed. While Rafael was willing to sacrifice his monsters to power up his "Guardian Dreadscythe," this only because of the influence of the Orichalchos. Once Dreadscythe was destroyed and the darkness in his heart was vanquished, Rafael reverted to his previous philosophy, sacrificing his remaining Life Points to resurrect his monsters.

Unlike his comrades, Rafael seems somewhat reluctant to play "The Seal of Orichalcos," choosing to trick Yami Yugi into playing it in their first match rather than using it himself. This may be out of a desire to avoid being affected by its magic, given how drastically it changed his personality when he did use it. 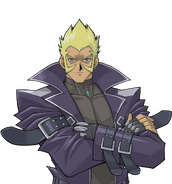 Rafael (Legacy of the Duelist)

*Disclosure: Some of the links above are affiliate links, meaning, at no additional cost to you, Fandom will earn a commission if you click through and make a purchase. Community content is available under CC-BY-SA unless otherwise noted.
... more about "Rafael"
RDF feed
Anime appearances
Yu-Gi-Oh! (anime) +
Arabic name
رافايل +
English name
Rafael +
Gender
Male +
Greek name
ραφαήλ +
Advertisement