It is the only type of monster effect that can be activated in Summon negation window, and the only one that can be chained to another activation (excluding SEGOC). As such, monsters effects that negate the activation or Summon are all Quick Effects.

For cards without PSCT, Quick Effects are more difficult to identify. They can be identified by text which indicates the same timing as the PSCT standard. Some Quick Effects can only be determined to be that way due to rulings.

Unless otherwise specified (e.g. "Light and Darkness Dragon"), the same Quick Effect can be activated multiple times during the same Chain, as long as it meets its activation conditions and/or timing each time.

The player controls a face-up "Horus the Black Flame Dragon LV8", and it is currently the opponent's Main Phase 1.

Since Chains resolve backwards, this Chain would resolve as follows: 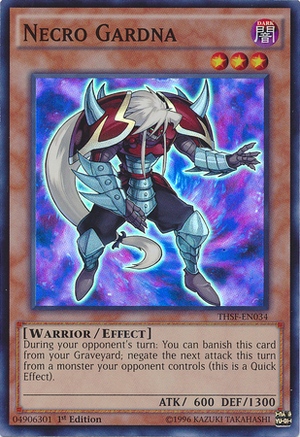 Retrieved from "https://yugioh.fandom.com/wiki/Quick_Effect?oldid=4273704"
*Disclosure: Some of the links above are affiliate links, meaning, at no additional cost to you, Fandom will earn a commission if you click through and make a purchase. Community content is available under CC-BY-SA unless otherwise noted.