Seto was one of the six Sacred Guardians who served under Pharaoh Atem. The wielder of the Millennium Rod, he was the son of Priest Akhenaden and first cousin of Pharaoh Atem, later succeeding him as Pharaoh. Seto Kaiba is his modern reincarnation. Seto is named after the Egyptian God Set. In the Philippine Dub, it changes into Ministro Seto due to his role change from a "Priest" to "Minister."

Unlike his reincarnation, Seto Kaiba, Priest Seto was more open-minded and willing to work with others. Despite this, he was shown to be quite cruel, once considering ordering the guards to draw and quarter a prisoner, even though he had just had his evil spirit exorcised from him and would not be likely to perform any more crimes without it. However, when advised to exercise restraint for such prisoners, he agreed. Seto also had a high degree of intelligence, which carried over to his modern reincarnation. Another trait carried to his later reincarnation was his ruthlessness and belief in power, as he suggested brutal torture and death sentences for criminals and would sacrifice comrades in order to achieve what he perceived to be "the greater good."

Although technically Prince Atem's cousin by blood, Seto was raised as a commoner; his identity as Priest Akhenaden's son (who was the brother of Atem's deceased father, Pharaoh Akhenamkenan) was hidden from him out of fear for his personal safety. Due to this, Seto grew up an orphan, and initially believed his father to have been a soldier who died in battle.

At one point, he saved a girl from slave traders. When the traders set fire to his village and killed his mother in retaliation, the girl, named Kisara, unknowingly repaid him by unconsciously releasing her inner spirit, the White Dragon, who killed the traders and saved Seto.

Priest Seto and Pharaoh Atem were friends and rivals who helped each other by testing their mystical skills. He was eventually able to become a part of the Pharaoh's court and own the Millennium Rod, not because of his lineage, but because of his test scores, which were the highest the court had ever seen.

When Bakura appeared at the royal court with his powerful Ka Diabound, Seto and the other Priests tried to fight him off, but with no success. Eventually, Atem was able to summon Obelisk the Tormentor, which forced Bakura to retreat. Seto then decided that Bakura needed to be stopped and began a search for Ka powerful enough to defeat Diabound. People could be tortured into revealing their Ka, so, without the Pharaoh's knowledge, he decided to try rounding up and torturing criminals. This plan, he believed, would accomplish two things: both finding a Ka that could destroy Diabound and reducing the number of criminals that incite anarchy in the Pharaoh's kingdom.

During his search, he reencountered Kisara, now a grown woman, who was being stoned because of her unorthodox appearance (snow white hair, pale tan skin, and deep blue eyes). Shada sensed a great power within her ("even surpassing that of the gods") and Seto took her back with him to the palace. There he remembered the first time they met.

Akhenaden, after being possessed by Zorc, later attempted to test Kisara's immeasurable power by forcing her to fight in a battle against two other prisoners. Seto stepped in and saved her, but the two fell into danger, which caused Kisara to release her Ka and save them both.

Later on, the Sacred Guardians and Atem went to Kul Elna to battle and defeat Bakura once and for all. Diabound was eventually destroyed by Mahad, who became the Dark Magician, but Akhenaden was eventually able to summon Zorc Necrophades. Zorc then transformed the former priest into the Great Shadow Magus, revealing that Akhenaden was Seto's father in the process, and his lifelong desire was to make Seto rise to the throne. Akhenaden then kidnapped Seto and took him to the Palace. He then instructed his son to extract the White Dragon from Kisara, and possess a power greater than the three Gods. Before Seto could decide against this, Kisara ran to save him. Enraged, Akhenaden questioned how his son could abandon the chance to rule over Egypt. Seto answered that there would be no benefit from a world ruled by Zorc, and that Kisara showed Seto a light, a light known as love.[1] At this point, Akhenaden fired off a beam of dark energy, and Kisara dies taking the blow meant for Seto.

After Kisara's death, Seto shed tears in front of the "Blue-Eyes" tablet as he held Kisara's dead body in his arms. (Notably, this is the "vision" Kaiba witnessed during his Duel with Ishizu Ishtar in the Battle City arc, as well as during his later Duel with Yami Bakura.) Seto ended up revolting against Atem, while at the same time denying allegiance to Zorc. He challenged Atem and his servants in the palace. Flashes of this duel were shown to Kaiba by Ishuzu and later witnessed by both Kaiba and Yugi during their duel in battle city.

Subsequently, Seto fought bravely by Atem's side in the battle against Zorc Necrophades, using the White Dragon. After Atem sealed himself and Zorc within the Millennium Puzzle, Seto succeeded him as Pharaoh. Seto then constructed the Tablet of Lost Memories, as a tribute to Atem. Sometime later in his reign, Seto presumably ordered all traces of Atem's name to be destroyed so as to prevent anyone from using it to resurrect Zorc, as Atem used his name as the key to free and seal Zorc away.

In the late twentieth century, Ishizu Ishtar exhibited the tablet, depicting Seto and Atem's battle, at the Domino City Museum. Before convincing Seto Kaiba to host the Battle City Duel Monsters tournament, she showed him the tablet and noted similarities between his and Priest Seto's use of the White Dragon. However, Kaiba was skeptical of its authenticity. Ishizu then showed Kaiba the battle between Atem and Seto. When Yami Yugi saw the tablet, he was immediately convinced the tablet depicted himself and Kaiba.

During Kaiba's quarter-final Duel against Ishizu, Kaiba saw a vision of Priest Seto holding Kisara before the White Dragon tablet, after her death. This prompted Kaiba to use the White Dragon's card, "Blue-Eyes White Dragon," to win the Duel. This interference disrupted Ishizu's prediction of Kaiba losing using "Obelisk the Tormentor."

During Kaiba's semi-final Duel against Yami Yugi, the destruction of their Egyptian God cards triggered another vision, in which they saw the battle between Seto, possessed by Akhenaden, and Atem. The vision ended during the summoning of the White Dragon and Dark Magician. Kaiba and Yami Yugi then Summoned the "Blue-Eyes White Dragon" and "Dark Magician" cards. Yami Yugi believed they were fated to continue the battle, while Kaiba believed the vision to have been an illusion created by subliminal suggestion.

During the Dark RPG in the twentieth century, Seto was a character on Yami Yugi's side. Events concerning Seto were largely the same in the RPG as the past.

As one of the Sacred Guardians, Seto was the wielder of the Millennium Rod, which granted him access to a various number of abilities, including, but not limited to, initiating Shadow Games and summoning spirit monsters known as Ka (as well as being able to extract another person's Ka and seal them away). Others include being able to cast illusions on an opponent as well as taking control of someone else's mind, allowing the owner to do with them as they see fit. 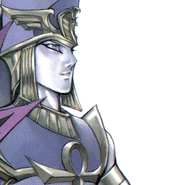 *Disclosure: Some of the links above are affiliate links, meaning, at no additional cost to you, Fandom will earn a commission if you click through and make a purchase. Community content is available under CC-BY-SA unless otherwise noted.
... more about "Priest Seto"
RDF feed
Anime appearances
Yu-Gi-Oh! (anime) +
English name
Seto +
Filipino name
Ministro Seto +
Gender
Male +
Advertisement