A playmat or game mat, also known as a Duel Field (デュエルフィールド Dyueru Fīrudo) is a flat material where a player can place their cards while Dueling. They often feature the artwork of a card (usually a Monster Card) or multiple cards, with many also labeling the official Card Zones for the Yu-Gi-Oh! Trading Card Game. Most mats are mass-produced, but some are only awarded to competitors and winners of various tournament events, making them very exclusive and highly valuable items.

This tournament is an event where Duelists can play a Deck based off of one of the five different anime series (eras) of Yu-Gi-Oh!. After all Swiss rounds for the tournament are completed, Duelists that are ranked 1st through 4th place will receive a Generation Game Mat that corresponds to the era of their Deck.[2]

Blaze of Destruction / Fury from the Deep

A multi-level tournament series aimed at competitive Duelists in regions across Europe and Oceania, this challenge offers unique mats to people who clear the events.

Stage 2 Finals: "Elder Entity Norden"
Awarded to those who reach the Top Cut Playoffs (number of playmats dependent on region).

Structure Deck playmats feature the cover card's artwork with the Structure Deck's name on the front. Due to the artwork, the card zones are less visible.

These playmats are awarded as 1st place prizes in 8-player single elimination tournaments.[3]

These playmats are awarded as 1st place prizes at select OTS (Official Tournament Stores) that host these tournaments, as well as Extravaganzas and WCQ. Selected OTS are stores that meet and exceed Konami's expectations.[4]

July 27, 2013 (North and Latin America)
Awarded to the winner of the event's tournament (at each participating OTS) 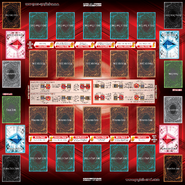 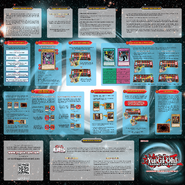 Awarded to judges who judge at a YCS, Regional, WCQ, or another high-level event.

"Enishi, Shien's Chancellor", "Grandmaster of the Six Samurai" and "Great Shogun Shien"
Only distributed to judges at 1 Shonen Jump Championship and UDE Day

"Harpie Channeler"
2013 reward for judging in the Americas at a YCS, WCQ, or National Tournament

"Mobius the Mega Monarch" (in artwork of "The Monarchs Awaken")
2014 reward for judging in Europe
(design voted on by judges that participated in 2013 European YCSes, from Lille onwards)

"Vampire Hunter" and "Crimson Knight Vampire Bram"
2014 reward for judging in the Americas at a YCS, WCQ, or National Tournament

"Nekroz" monsters
2015 reward for judging (except YCS Tacoma that year)

Awarded to judges that incur significant travel costs for going to high-level events to judge (regardless of distance traveled).

These are awarded at Win-A-Mat tournaments.

So far, there has been only 1 Charity Win-A-Mat event, which was held at YCS Providence 2012. The proceeds of the event went towards the children of Dan Green.[8]

These are awarded at Win-A-Mat tournaments that use the Beta Format.

Originally handed out at tournaments, these mats are more durable and are now widely available through the market of Gold Series 4: Pyramids Edition.

These mats feature the cover card monster with less visible backgrounds; they are handed out along with a promo card at Sneak Preview events.

Storm of Ragnarok: "Odin, Father of the Aesir"

Code of the Duelist: "Firewall Dragon"

Battle Pack 2: War of the Giants: "Slifer the Sky Dragon"

Battle Pack 2: War of the Giants: "The Winged Dragon of Ra"

Battle Pack 2: War of the Giants: "Obelisk the Tormentor"

Legendary Collection 5 Mega-Pack back side

Legendary Collection 4 Mega-Pack back side

2-player playmats awarded as Case Toppers for stores who order a case of the newest product, themed accordingly to said product. New designs came out annually on January, until after Legacy of the Valiant was released, but renewed as of Breakers of Shadow. 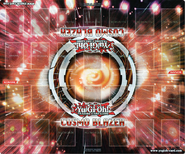 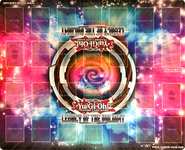 Legacy of the Valiant 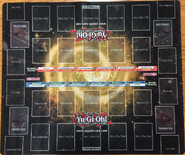 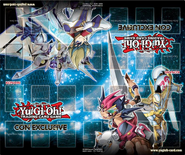 4 to 6-player playmats, mainly intended for tournament store use to cover entire tables.

Ordeal of a Traveler program

"Ghost Ogre & Snow Rabbit" (2015)
Reward for players who attended a minimum of all but one of the 2015 Premier European Yu-Gi-Oh! events (i.e. YCS events and the WCQ: European Championship).[12] Eligible Duelists received this mat by visiting the Redemption Desk at any 2016 European YCS and providing proof of identity.[13]

"Ghost Ogre & Snow Rabbit" (2015)
Mousepad (half the size of the playmat version)
Reward for players who attended a minimum of all but two of the 2015 Premier European Yu-Gi-Oh! events.[12] Eligible Duelists received this mousepad by visiting the Redemption Desk at any 2016 European YCS and providing proof of identity.[13]

Yugo & "Clear Wing Synchro Dragon"
Reward for players who attended a minimum of all but two of the 2015 Premier European Yu-Gi-Oh! events, as compensation for the delayed reward distribution.[12] Eligible Duelists received this mat by visiting the Redemption Desk at any 2016 European YCS and providing proof of identity.[13]

Noble Knights of the Round Table Box Set: "Noble Knight" monsters and "Merlin"

Structure Deck playmats feature the cover card's artwork with the Structure Deck's name on the front. Due to the artwork, the card zones are less visible.

Structure Deck: Lord of the Magician

Structure Deck: Advent of the Emperor 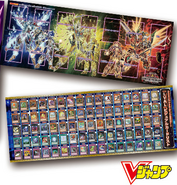 Legacy of the Valiant Booster Pack Guide: Double-sided paper playmat, with "Bujin" monsters on one side and a set spoiler for LVAL on the other side

Legacy of the Valiant Booster Pack Guide: Awarded to 200 people out of 250 people who entered the lottery in the guide and won

"Trishula, Dragon of the Ice Barrier"

Yu-Gi-Oh! The Dark Side of Dimensions: "Magician Girl" monsters
(maximum of 1 mat per ticket purchase for the movie, via Lawson's Loppi system, with each ticket costing 1500 yen and the mat costing 2160 yen)

Asia Championship 2016: "Silent Swordsman" and "Silent Magician"
Awarded to all 18 participants in the event.

Asia Championship 2016: "Arcana Knight Joker" and the Three Musketeers of Face Cards monsters
Awarded to the top 4 players of the event.

These tournaments consist of teams of 3 players competing against other teams.

Asian Championship Plus 2012: "Mermail" monsters
Awarded to each member of the top 3 teams

Asia Championship Plus 2013: "Number C39: Utopia Ray Victory"
Awarded to each member of the top 3 teams

Asia Championship Plus 2013 - Battle Royale Side Event: Rio Kamishiro
Players earned 1 stamp for every single Duel they won in the side event. Players could redeem 20 stamps to earn this mat.

Asia Championship Plus 2014: "Sylvan" monsters
Awarded to each member of top 4 teams

A spiritual successor to the discontinued Asia Championship Plus tournament series, except in a single-player format.

Asia Championship SP (2015): "Blue-Eyes Spirit Dragon" and "Priestess with Eyes of Blue"
Awarded to all 12 participants in the event.[19]

Asia Championship SP (2015): "Dracoslayer" monsters
Awarded to the top 4 players of the event.[19]

These playmats are awarded to judges who judge in major Asian events.

At the end of each season, Duelists with the highest number of ranking points earned from ranking tournaments will be able to participate in a Rank-Up-League tournament (Taiwan: Top 64 Duelists per season; Hong Kong / Singapore / Malaysia / Philippines: Top 32 Duelists per season).[21]

All participants in the Rank-Up-League receive these playmats.

Yuya, Yuto, and Yugo
Taiwan: Awarded to the winner of each Top Store tournament

The New Challengers: "Dark Rebellion Xyz Dragon"
Taiwan: 1 playmat given with each case of NECH sold, for stores to distribute at will
Other Asian areas: Awarded as prizes for NECH release tournaments

The Rarity Collection: 1 playmat given with each case of TRC1 sold, for stores to distribute at will

In video games, "Duel Fields" serve no practical purpose and only serve as a customizable feature.

Yugi Muto with Alpha, Beta and Gamma the Magnet Warrior