Platinum Rare is a TCG-exclusive rarity which debuted in and is currently exclusive to the Noble Knights of the Round Table Box Set, where every card in the set is of this special rarity. As the name implies, cards with this rarity feature platinum-colored foil in the same vein that Gold Rare cards feature gold foil; however, unlike Gold Rare but like Platinum Secret Rare, this foil covers the entirety of the card's surface, with the sole exception of the card text box and the Attribute icon or Spell/Trap icon. 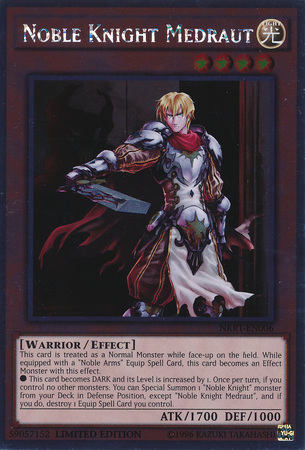 Retrieved from "https://yugioh.fandom.com/wiki/Platinum_Rare?oldid=4073062"
*Disclosure: Some of the links above are affiliate links, meaning, at no additional cost to you, Fandom will earn a commission if you click through and make a purchase. Community content is available under CC-BY-SA unless otherwise noted.