Due to Levels and Ranks restrictions, no monsters can be Pendulum Summoned if cards in Pendulum Zones have Pendulum Scales that differ by one or less (i.e. 4 and 4, 3 and 4). However, this has no impact on Pendulum Effects.

Pendulum Summoning is unrelated to the effects of the Pendulum Monsters in the Pendulum Zones, and can be performed even if their effects are negated (such as due to the effect of "Vector Pendulum, the Dracoverlord"). 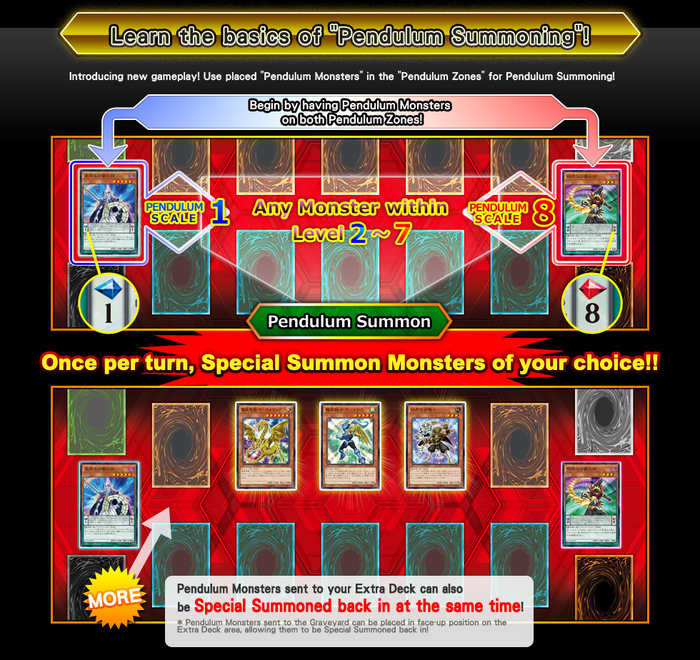 Using Pendulum Scales of 1 and 8 to Pendulum Summon three monsters: A Level 6, a Level 5, and a Level 3.

When a Pendulum Summon is performed in the anime, a portal opens between the two Pendulum Zones and streaks of light emerge from these zones, representing the monsters. The color of the light streaks appears to depend on the number of monsters that are being Summoned; three monsters for example results in a green, blue and a red streak, while two results in a green and a blue streak.

On occasion, the energy changes. Declan's monsters vary between a surge of purple light or purple streaks, whereas "Mayosenju Daibak" appears from the portal in the form of a green tornado. In addition, Yuya Sakaki's Pendulum Summons have an enlarged version of his pendant swinging between the zones.

When a Pendulum Summon of five monsters is performed, the colors representing the monsters merge together into a multi-colored spiral of light before appearing on the field, symbolizing the powerful Summon.

In the manga, when a Pendulum Summon occurs, Yuya's pendant breaks and a monster appears from it.