PaniK, known as the Player Killer of Darkness in the Japanese version and Yamitsukai in certain video games, is a player Eliminator hired by Maximillion Pegasus. He is a brutal man who targeted Duelists who had earned many Star Chips.

Because of his brutality, and the apparent frequency with which he knocks Duelists out of the tournament, he wears 2 double-sized Dueling Gauntlets.

PaniK forced Mai Valentine to wager all eight of her Star Chips in their Duel despite the fact that she only needed to wager two to achieve the ten required. Yugi Muto and his friends arrived just after PaniK defeated Mai.

In order to salvage the situation and return Mai's Star Chips, Yami Yugi challenged PaniK to a Duel. Although PaniK's use of "Castle of Dark Illusions" and the night field both gave his monsters a powerful advantage, Yugi managed to flush out his monsters with "Swords of Revealing Light", forcing PaniK to use "Chaos Shield" for further defense. As a result, Yugi took advantage of this by destroying the Castle's floatation ring with the effect of "Catapult Turtle". When the effect of "Swords of Revealing Light" expired, the castle fell on top of PaniK's monsters that were unable to escape the confines of "Chaos Shield", destroying them.

With this costing him the Duel, PaniK activated the arena's flame ejectors in an attempt to incinerate Yami Yugi. However, Yami Yugi was protected by the power of the Millennium Puzzle and inflicted a Mind Crush on PaniK, presumably exorcising the evil within him. (In the English anime, it is implied that either PaniK's soul or the evil within his soul is sent to the Shadow Realm.)

PaniK also appeared as one of the lost souls wandering the Stone Wilderness, when Yami Yugi ventured through to find Yugi.[1] 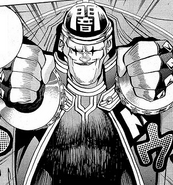 Panik plays a Dark Attribute Fiend Deck. Using "Castle of Dark Illusions" he conceals his monsters within a field of shadows, protecting against attacks since his opponents cannot see his cards and thus cannot know how powerful they are; the Night also provides his monsters with a Field Power Bonus, while covering other terrains, preventing his opponents from gaining the same advantages.

When his monsters are revealed by "Swords of Revealing Light", Panik switches to a defensive strategy, bolstering his monsters' DEF with "Chaos Shield". Yami Yugi claims Panik's method of Dueling is the way of a coward, only powerful when he strikes from the shadows and cowering when confronted in the open, with Yugi's counter-strategy using Panik's reliance on defense against him by putting him in a position where his defenses trap and destroy his own monsters.

In Yu-Gi-Oh! Duel Monsters, Player Killer of Darkness appears as an opponent in the dark Forest area of the Duelist Kingdom island. His Deck consists of many Dark, Fiend-Type Monsters, including Castle of D. Magic and Metal Guardian, used in his Duel against Yugi.

Duelists of the Roses