Start a Wiki
This article is about the gameplay term. For other uses, see Owner (disambiguation). 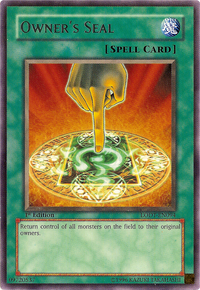 Owner or original owner ()ち motomoto mochinushi) refers to the player that originally possesses a card. The card's owner is distinct from its controller, as while the controller of a card may change, its owner cannot.

Upon beginning a Duel, all cards in a player's Main Deck, Extra Deck and Side Deck are considered to be owned by that player.

By default, cards remain under the control of their owners, but several cards can change control of cards, such as "Change of Heart", "Number 11: Big Eye", "Creature Swap" and "Enemy Controller". When a monster switches control, it is placed on the new controller's side of the field.

When a card leaves the field or is detached, it is moved to the owner's hand, Main Deck, Extra Deck, Graveyard or Banished Zone (depending on where the card would be sent), regardless of controller.

Retrieved from "https://yugioh.fandom.com/wiki/Owner?oldid=4085463"
*Disclosure: Some of the links above are affiliate links, meaning, at no additional cost to you, Fandom will earn a commission if you click through and make a purchase. Community content is available under CC-BY-SA unless otherwise noted.