Odion is a playable Legendary Duelist in Yu-Gi-Oh! Duel Links. This is a video game depiction of Odion, a character from the Yu-Gi-Oh! anime.

Black Gate Keys are required to Duel Odion at the Gate.

The special event Solemn Odion has Odion use different Decks and drop different rewards than usual.

Odion is the servant of the Ishtar family and has sworn his allegiance to Marik. An honest Duelist who Duels fair and square, his Deck is comprised of Trap Monsters, such as "Embodiment of Apophis", to ensnare his unsuspecting opponents.

Immediately after the player claims the reward for Odion's appropriate Character Unlock Mission, they will encounter Odion for the first time. At the time, he is engaged in a Duel with Jay, the latter struggling against him. After Odion defeats Jay with his "Judgment of Anubis" card, Odion reveals that he himself never thought he'd be able to Duel again after all the darkness he experienced. He then wonders if his own presence in Duel World means that "Master Marik" is in Duel World as well.

Upon Odion's first defeat, he remarks that the player's tactics were most impressive. He goes on to claim that since the player showed no fear against his strategies, that proves they are an honorable Duelist. Odion then declares that it was his privilege to Duel the player, before prompting the player to continue their journey and seek their glory.

After the player redeems their final unclaimed reward for Odion's Character Unlock Missions, they will encounter Odion again, who tells the player that even when people are lost in the darkness, those people must not lose their will to fight for the light, something which he proclaims he's done his whole life. He recommends that this is something the player should do as well. Odion goes on to declare that fighting for the light is fighting for one's own existence, and that he himself will keep fighting with his "Embodiment of Apophis" card. He concludes his dialogue by stating his quest for the light shall never end. 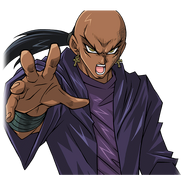 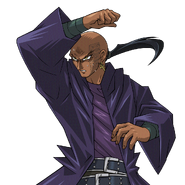 Trap of the Sacred Beast
Monsters (3)

Trap of the Sacred Beast
Monsters (6)

The following lists are the rewards the player accumulates from having Odion reach a certain Level.

When dueling against Level 40 Odion, these are the only cards that can drop; at lower levels, cards from the standard pool for Legendary Duelists may also drop.

When dueling against Level 40 Solemn Odion, these are the only cards that can drop; at lower levels, cards from the standard pool for Legendary Duelists may also drop.

*Disclosure: Some of the links above are affiliate links, meaning, at no additional cost to you, Fandom will earn a commission if you click through and make a purchase. Community content is available under CC-BY-SA unless otherwise noted.
... more about "Odion (Duel Links)"
RDF feed
DULI Deck
Odion Deck +, Feeble Immortal +, Mystical Violet Crystal +, Immortal Apparition +, Embodiment of Apophis +, Trap Tactics +, Trap of the Sacred Beast +  and Oceanic Guardians +
Gender
Male +
Video game appearances
Yu-Gi-Oh! Duel Links +
Advertisement