Odion wears golden earrings that resemble an ankh. He has a tattoo in the dub/carving in the original of hieroglyphics on the left side of his face, from just touching his left ear to halfway through his left eye in width and from the top of his forehead to just below his chin in length; in certain scenes from a different angle, the tattoo appears as if it only touches his eye like his ear, instead of going through it. He has dark skin, green eyes and mainly a bald head, with his only hair being a large, long black ponytail coming out of the very back of his head.

He wears, throughout most of the Battle City tournament in both season 2 and the second part of season 3, the same purple hooded cape with the Eye of Anubis on the hood and a gold chain that Marik Ishtar originally wore as well. Odion has, underneath the cape, a long-sleeve dark purple sweatshirt, black pants, and two rather large dark belts, which he also wears in season 5, though without the cape, at the Egyptian airport. He also, before his true identity was revealed, since he was posing as Marik beforehand, had a fake Millennium Rod in the Battle City tournament finals.

Odion is normally quite quiet, remaining loyal to Marik Ishtar despite being mistreated at times throughout season 2 and season 3, because of 3 reasons: #1 Mr. Ishtar thought of him as a servant to the tomb-keeper heir (Marik), #2 Odion was always trying to keep Marik's alter ego, Yami Marik, in control and unable to take over Marik's body, and #3 he promised Mrs. Ishtar as she died that he would take care of his adoptive siblings. In the duel with Joey Wheeler, he was louder and more arrogant due to posing as Marik. However, one of the few times Odion was truly seen speaking his mind was after he became conscious again in the tournament, near the end of the final duel between Yami Marik and Yami Yugi, in order to successfully help Marik regain control of his body. He appears polite, despite certain rude or villainous actions he had to do for Marik, such as during his duel with Joey Wheeler in Battle City: he called Joey "Mr. Wheeler", while Seto Kaiba only refers to Joey as "Wheeler"; after Joey had won the duel, Odion even told Joey that it had been an honor to duel him. After the Battle City tournament, when he, Marik, and Ishizu reappeared in season 5 to meet with Yugi and his friends at the Egyptian airport, there were not enough scenes to show the brothers' interaction with each other, although he still appeared very quiet and loyal to Marik. 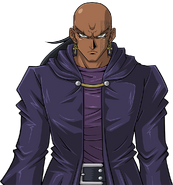 Retrieved from "https://yugioh.fandom.com/wiki/Odion?oldid=3154613"
*Disclosure: Some of the links above are affiliate links, meaning, at no additional cost to you, Fandom will earn a commission if you click through and make a purchase. Community content is available under CC-BY-SA unless otherwise noted.