Noah Kaiba (Kaiba Noa) is the biological son of Gozaburo Kaiba and the main antagonist of the anime-exclusive Virtual World arc until his defeat at Yami Yugi's hands using both his and Seto Kaiba's cards. 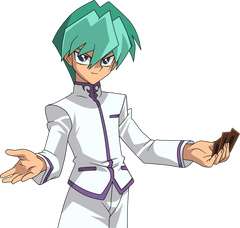 In the English dub, Noah tends to use the expression "shall we?" in duels, he also speaks with a squeaky voice, though after his change of heart, his voice becomes more mature.

In the Japanese version he references religion, such as referring himself as a God or a creator and saying that demons (fiend/zombie monsters) belong in "hell". He tends to be very impolite with everybody, mainly the Big Five. He tends to laugh manically. He refers to himself with "boku," a word for "I" typically spoken by young males, besides being the same age as Kaiba, this could represent that he is still immature.

Noah Kaiba lived with his power-hungry and wealthy father, Gozaburo, in luxury. To groom him as the heir of Kaiba Corp., he was made to study heavily in various fields of academics, music and sports not unlike Seto Kaiba; unlike Seto, he genuinely enjoyed his lessons. To ensure he had the best education, Gozaburo hired only the best instructors and tutors. When Noah was around twelve years old, he was involved in a car accident which left him in a critical condition with little chance of him surviving. In the hope of saving his son, Gozaburo uploaded Noah's mind onto a supercomputer just before Seto was adopted. Noah's consciousness lived in a Virtual World that initially only included his own empty bedroom, but was ultimately expanded to include many other areas. Noah at first found his virtual existence almost pleasant, even enjoyable. The limits and bugs in the virtual citizens and his own virtual pet caused Noah to grow increasingly frustrated, agitated and in some cases, even sadistic to seek out some satisfaction in his virtual existence. While his intelligence (and ego) grew exponentially, with no real human contact, Noah's maturity remained at the level of a small child.

Gozaburo had adopted Seto as a model for Noah, but eventually, he forgot about his own son, realizing he would always be a spoiled brat, in favor of teaching Seto. When Seto took over KaibaCorp, Gozaburo (in frustration and defeat) uploaded his own mind into Noah's Virtual World.

Six years later, Noah took his revenge on Seto. He kidnaps Seto and his passengers on Seto's Battle Ship during the semi-finals of Battle City, hoping to take one of the passenger's bodies, preferably Seto's. With the help of the Big Five (the former chief executives of KaibaCorp who had been trapped in the virtual realm after their failed coup) and his father, Noah locked Seto and the others in his virtual world and Dueled with them for their bodies.

Unfortunately for the Big Five, they all fail to defeat the group, despite the mediocre and amateur Dueling abilities of such players as Téa Gardner, Tristan Taylor and Serenity Wheeler. The Big Five were only able to claim Tristan's body- and even Tristan was only acquired on a technicality as Serenity actually won that Duel with the aid of Duke Devlin after Tristan's defeat, with the combined Big Five being defeated by Yami Yugi and Joey Wheeler in a final Duel. Disgusted at the Big Five's failures, Noah deleted them (in the dub, he imprisoned them in isolated portions of the Virtual World) and decides to take on Seto himself, attempting to take Seto's body so that he could fulfill his role as Kaiba Corporation's heir. He brainwashed Mokuba Kaiba into regarding Noah as his true brother rather than Seto, in order to weaken Seto's resolve, before Noah personally Duels with Seto.

Though Noah proved to be more skilled than the Big 5, he could have used Shinato's effect to stop himself from being defeated, but used Mokuba to discourage Kaiba from attacking, as both Noah and Kaiba knew continuing with the attack would severely harm Mokuba, and because of how close Kaiba is with Mokuba, Noah knew Seto would never risk destroying him for the sake of winning one Duel. Just as Seto Kaiba was about to lose, he managed to get through to Mokuba and freed him from Noah's mind control. In retaliation, Noah turned both Seto and Mokuba into stone.

Noah then dueled with Yami Yugi, who took Kaiba's place and used both his and Kaiba's cards to prove to Noah that he only won by trickery and deceit. Despite Yami Yugi's protests against Noah's cruel tricks, Noah appeared to have the advantage in the duel, as he not only turned Yugi's remaining friends to stone with each attack, but his use of "Shinato, King of a Higher Plane" as his Deck Master allowed him to add to his Life Points whenever a monster is sent to the Graveyard, along with his Spirit monsters. This left Yami Yugi at an even greater disadvantage when he had started out with a very small number of Life Points to begin with, since Seto's had been worn down to almost nothing. However, although Noah even manages to defeat Yami Yugi's three Dark Magicians ("Dark Magician", "Dark Magician Girl" and "Magician of Black Chaos"), he loses when the Pharaoh, having drawn "Card of Sanctity", is able to draw six new cards- one for each of his defeated friends-, allowing him to draw Kaiba's three "Blue-Eyes White Dragon" cards, and fused them to form the "Blue-Eyes Ultimate Dragon" to defeat Noah's strongest Spirit monster, Yami Yugi subsequently using "De-Fusion" to separate them and deplete Noah's Life Points, now that he has no monsters on the field to protect him.

After Gozaburo revealed himself, Noah showed everyone that there was a way for them to escape, but when he shows Mokuba to it, he escapes in Mokuba's body and leaves the virtual realm. Using his new body, Noah attempts to blow up the computer by ordering a missile equipped satellite to destroy the submarine and the minds of everyone inside along with it

At the very last minute, Noah remembered how Mokuba had called him "brother" and still loved him, even after he tried to kill him and Seto. Realizing that what he was doing was wrong, Noah tried to call off the satellite, but found out that the computer he used to control was destroyed by Yami Marik. Despite that, he managed to give Mokuba back his body, get every one out of the virtual world to safety, and save them from being blown up. Before Noah evacuated Yugi and his friends from his Virtual World Island, he apologized to them for his transgressions, and begged Yugi to rescue Seto from Gozaburo, as they locked themselves in a Duel.

As everyone else hurried to escape, Noah thanked Mokuba for showing him true friendship and brotherhood, bids him farewell, and sent him away to safety along with Yugi and the others. With Noah unable to stop the explosion, Noah's and Gozaburo's minds were destroyed, because Noah had made sure to keep Gozaburo from escaping into the net by binding himself with his father. After this, Noah was heard by Mokuba telling him goodbye (he is not heard in the dub, and this small scene with Mokuba is removed). Noah was finally able to accept the fact that he had died long ago, unlike his father. In the English dub, he is believed to have saved himself on a back-up file before the explosion, allowing the possibility of Mokuba one day being able to see him again.

Noah doesn't return to the real world in this arc but was mentioned by Tea and Serenity after the Battle City Tournament ended. Two flashbacks appear: one where he was Dueling Yami Yugi, and the other when Noah said that he would free Gozaburo's mind to evade hurting anyone again. Despite that, nothing was mentioned about Noah's relationship with Seto Kaiba and Mokuba.

Against Seto, Noah uses a Creation Deck based around the symbolic creation of Earth. First he uses elements that homage the pagans ("Aeris", "Chiron the Mage"), then the Flood sent by God, and after that its developmental and evolutionary stages, such as the reign of the dinosaurs, the ice age, modern and futuristic times and the Apocalypse (represented through his Deck Master, "Shinato, King of a Higher Plane").

*Disclosure: Some of the links above are affiliate links, meaning, at no additional cost to you, Fandom will earn a commission if you click through and make a purchase. Community content is available under CC-BY-SA unless otherwise noted.
... more about "Noah Kaiba"
RDF feed
Anime appearances
Yu-Gi-Oh! (anime) +
Gender
Male +
NTR Deck
Divine Ark +
Video game appearances
Yu-Gi-Oh! Reshef of Destruction +  and Yu-Gi-Oh! Nightmare Troubadour +
Advertisement