watch 02:34
Wiki Targeted (Games)
Do you like this video?
Play Sound

Nick is a Standard Duelist in Yu-Gi-Oh! Duel Links. He appears in both Duel World (DM) and Duel World (GX). Additionally, he cannot be unlocked, only appearing as an opponent. He can also be dueled in Tag Duel Tournament and Duel Island: -Gladiator-. 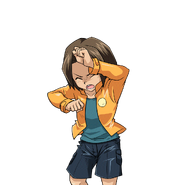 Retrieved from "https://yugioh.fandom.com/wiki/Nick?oldid=4052235"
*Disclosure: Some of the links above are affiliate links, meaning, at no additional cost to you, Fandom will earn a commission if you click through and make a purchase. Community content is available under CC-BY-SA unless otherwise noted.
... more about "Nick"
RDF feed
English name
Nick +
Japanese translated name
Mature Boy +
Video game appearances
Yu-Gi-Oh! Duel Links +