McDonald's Promotional Cards are a series of cards included in McDonald's Mighty Kids/Happy Meals. They were included with 1 of 3 CDs each featuring preview music from the soundtrack Yu-Gi-Oh! Music to Duel By.

This set provides an English printing for the cards released in the Limited Edition packs in the OCG. It also includes some cards from Booster 2, Booster 6 and Premium Pack. All of these cards were original to the set, with the exception of "Stuffed Animal", which was originally printed in Tournament Pack: 2nd Season. Many of these cards were reprinted in Legendary Collection 3: Yugi's World Mega Pack.

There are 2 cards per pack. The set contains 15 cards. This is comprised of: 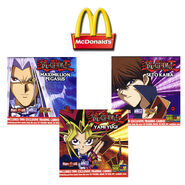