He appears in-game after the player reaches Stage 13 of Duel World (DM), at which point his Character Unlock Missions become available. Prior to November 6, 2017, he was exclusive to the special event Welcome to Toon World, only being able to be dueled or unlocked during the event. Pegasus also serves as the final boss of the special event Duelist Chronicles: Set Sail for the Kingdom.

White Gate Keys are normally required to Duel Maximillion Pegasus at the Gate. During the special event Welcome to Toon World, Star Chips are required instead.

The special event Fantastic Pegasus has Pegasus use different Decks and drop different rewards than usual.

Maximillion Pegasus is the president of Industrial Illusions and the genius game designer who created Duel Monsters. He uses the power of his Millennium Eye to read his opponent's mind and see the cards in their hand. His Deck focuses on Toon Monsters to toy with his opponent. But when he gets serious, his "Relinquished" has an effect that enables it to absorb his opponent's monsters.

When the player engages in the "Welcome to Toon World" event for the first time, they will be greeted by Pegasus. He introduces himself, before explaining that he's hosting a special event meant to parallel the Duelist Kingdom tournament (which he describes as the greatest tournament ever) as thanks to Kaiba creating an entire world dedicated to playing Duel Monsters. He then informs the player that they must collect Star Chips to earn the right to challenge him, and if they win, they will receive "unimaginable riches"; if they lose, he claims they will receive "UNIMAGINABLE AGONY". Pegasus then claims he's joking, and says he won't seal the player's soul into a card if they lose, before appending that statement with a "maybe." He concludes his dialogue by then addressing all Duelists, prompting them to set off for Toon World, become the champion, and earn their glory.

Each time the player defeats Pegasus, Pegasus will congratulate the player for the excellent Duel and tells the player to come again when they have enough Star Chips. At this point, the player's earned Points from the Duel are then counted. However, if the player defeated Pegasus who had used a certain Deck (from Level 10 to 30) that he had not been defeated with yet, an additional dialogue will play after the Point calculation. In this scenario, he states since the player is so eager to win, he must prepare a Deck that will provide a worthy challenge to the player. (After this, the player receives a notification that Pegasus can now be challenged with his next higher-Level Deck.)

When the player defeats Pegasus (who is using their Level 40 Deck) for the first time, Pegasus will express disbelief at his loss, even when he had the Millennium Eye to aid him. He falls silent for a moment, before commending the player on their outstanding skills and then preparing their prize. He adds that he also has many other prizes - too many to carry at once - and prompts the player to keep Dueling him to earn them all.

After the player manages to achieve a minimum of 250000 Points in the "Welcome to Toon World" event, Pegasus will be incredulous at his loss - as the creator of Duel Monsters - to the player. He wonders if he's lost his touch, since it has apparently been years since his Dueling skills were tested. He concludes that this is the case, and so commits himself to "joining the fray" as a Duelist and competing. Pegasus then warns the player that he doubts they will stand a chance against his Millennium Eye, and claims that no Duelist can survive the unstoppable might of his "Relinquished". He welcomes the player to try, but hopes the player's moves won't bore him to sleep; he then concludes his dialogue in laughter. (After this, the player receives a notification that Maximillion Pegasus is now unlocked as a playable character.)

After the player manages to achieve a minimum of 1500000 Points in the "Welcome to Toon World" event, Pegasus will contemplate the fact that strategies in Duel World are constantly evolving. He then admits that even though he's a game designer, he has seen new moves and tactics he's never dreamed of, with the player being on the leading edge; he also admits that it was amazing for him to Duel the player. He concludes his dialogue by awarding the player with his final prize for the event: a glossy "Toon Masked Sorcerer" card.

If the player participated in the "Welcome to Toon World" event, then after the event ends, the next time the player enters Duel World (from exiting the Shop, from logging-in, from completing a Duel, etc.), they will encounter Pegasus. In a subsequent brief dialogue, Pegasus observes that the player is quite talented and that his own Deck never stood a chance. He then determines that he'll rethink his Deck, considering which cards to use next time, before telling the player to "stay tuned" and giving a brief laugh. (After this, the player receives a notification that Pegasus will no longer appear at the Gate.) 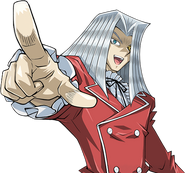 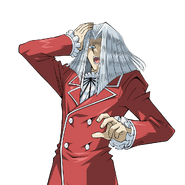 Skill: "It's a Toon World" (Maximillion Pegasus starts the Duel with "Toon World" on his field.)

Skill: "It's a Toon World" (Maximillion Pegasus starts the Duel with "Toon World" on his field.)

Skill: "Power of Dark" (Maximillion Pegasus starts the Duel with "Yami" on his field.)

Skill: "Unholy Advent" (Once per Duel, before his normal draw, Maximillion Pegasus can create a "Relinquished" on his field from outside of his Deck.)

The following lists are the rewards the player accumulates from having Maximillion Pegasus reach a certain Level.

When dueling against Level 40 Maximillion Pegasus, these are the only cards that can drop; at lower levels, cards from the standard pool for Legendary Duelists may also drop.

When dueling against Level 40 Fantastic Pegasus, these are the only cards that can drop; at lower levels, cards from the standard pool for Legendary Duelists may also drop.