Marik Ishtar is a character who appears in Yu-Gi-Oh! Duel Links. While he does have dialogue in the overworld, he does not appear as a playable duelist but has a cut-in sprite and loss sprite in the game data. This is a video game depiction of Marik Ishtar, a character from the Yu-Gi-Oh! anime.

A silhouette of Marik Ishtar appeared at the end of the special event Unleash the Egyptian God Card! Yami Marik Returns II, although he was not identified by name. Marik Ishtar also appears during the story of the special event Duelist Chronicles: Battle City Begins! He also has dialogue (without physically appearing) when dueling Strings in Duel World. In "The Shadow Memories: Bakura" event, Marik Ishtar appears in the cutscenes telling the story when Marik and Bakura teamed up to take down Yugi. 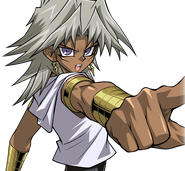 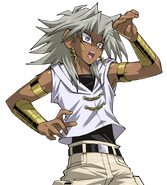 Defeat
*Disclosure: Some of the links above are affiliate links, meaning, at no additional cost to you, Fandom will earn a commission if you click through and make a purchase. Community content is available under CC-BY-SA unless otherwise noted.
... more about "Marik Ishtar (Duel Links)"
RDF feed
English name
Marik Ishtar +
Gender
Male +
Video game appearances
Yu-Gi-Oh! Duel Links +
Advertisement