Mako Tsunami is a playable Legendary Duelist in Yu-Gi-Oh! Duel Links. This is a video game depiction of Mako Tsunami, a character from the Yu-Gi-Oh! anime.

He appears in-game after the player claims his Character Unlock Mission reward for successfully conducting 150 Tribute Summons/Sets. Mako also appears as an opponent during the special events Duelist Chronicles: Set Sail for the Kingdom and Duelist Chronicles: Battle City Begins!

Blue Gate Keys are required to Duel Mako Tsunami at the Gate.

Mako Tsunami participates in many tournaments so that he can use the prize money to buy a fishing boat and sail the mighty waves. He masterfully used his Sea Deck to give Yugi and Joey some of the toughest Duels ever. His signature monster "The Legendary Fisherman" unleashes its true strength when it swims out into his "Umi" field.

Immediately after the player claims the reward for Mako Tsunami's appropriate Character Unlock Mission, they will encounter Mako for the first time. He will give an exclamation of surprise upon seeing his surroundings, before declaring that this is splendid since he can see a whole school of prey. He briefly laughs, predicting that he'll bring in "a haul of a lifetime," but then turns serious, saying that Duelists should now prepare to feel the full fury of the open waters.

Until the player defeats Mako for the first time, whenever they challenge Mako to a Duel, he will be surprised and incredulously ask the player if they are actually serious in wanting to Duel him. He then laughs, before remarking that it seems a big fish has wandered into his waters. Mako then accepts the player's challenge, saying that he never turns down a Duel, but further warns the player that they've made a huge mistake by "swimming into [his] net." He concludes his dialogue by telling the player, "Prepare to sleep with the fishes!"

Upon Mako's first defeat, he gives a brief exclamation of frustration and admits the player won. He goes on to compliment the player, saying that they're as impressive as a shark among guppies. However, he also declares that this defeat won't stop him from owning his own boat and sailing the ocean, and promises that until he "casts off" again, he will never give up.

After the player redeems their final unclaimed reward for Mako Tsunami's Character Unlock Missions, they will encounter Mako again, who explains that since he can't head out into the sea until he has his own fishing boat, this is the reason why he'll become the number one Duelist, as the prestige from that position will allow him to acquire his ship. He goes on to declare that he and the ocean await each other, and that he is looking forward to facing everything that the waters have in store for him. However, he also declares he won't be traveling alone - he'll be sailing with his "The Legendary Fisherman" card, which he has won countless Duels together with, and will continue to keep winning with. 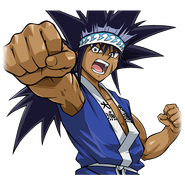 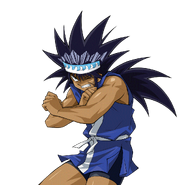 Duelist of the Sea
Monsters (18)

Shadow of my Father
Monsters (14)

The following lists are the rewards the player accumulates from having Mako Tsunami reach a certain Level.

When dueling against Level 40 Mako Tsunami, these are the only cards that can drop; at lower levels, cards from the standard pool for Legendary Duelists may also drop.

The Legendary Duelists who, in descending order, share the same amount of card-specific dialogue with each other are: