Mai Valentine is a playable Legendary Duelist in Yu-Gi-Oh! Duel Links. This is a video game depiction of Mai Valentine, a character from the Yu-Gi-Oh! anime.

She appears in-game after the player reaches Stage 10 of Duel World (DM) and can be unlocked as a playable character starting at Stage 11.

Green Gate Keys are required to Duel Mai Valentine at the Gate.

The beautiful and bold Mai Valentine has traveled the world, taking down all challengers along the way. Though she may seem bossy and tough, she also has a softer side, like an older sister that you can count on (But don't call her "old!"). When Dueling, her "Harpie Lady" dazzles her opponents into defeat.

After the player advances to Stage 10, they will encounter Mai for the first time, who is engaged in a Duel with Jay. After Mai's apparent victory, she comments that she originally had high expectations when she heard all the top Duelists would be in Duel World, and wonders if there is anyone in Duel World who can give her a challenge.

Until the player defeats Mai at least once, whenever they challenge Mai to a Duel, she remarks that the only way to get further is by defeating her. She then observes that the player is already wondering what the next Stage will be like, and chides them for thinking too far ahead; instead, she prompts the player to never take their eyes off their opponent, especially since it's her. She concludes her dialogue by stating she's definitely in the mood for a Duel.

Until the player defeats Mai at least once, whenever they lose to her, she will express disappointment and claim their Duel was so easy that she could have won it in her sleep. However since she's in a good mood, she tells the player, she'll give them some advice: a Duelist's spirit isn't tested when they win, but rather when they lose. In other words, she says that if a Duelist has heart, then a defeat won't break them, before rhetorically asking the player if they have heart. At this point, she says she's given enough advice to the player, and that she hopes the player will give her a challenge the next time they Duel her.

Upon Mai's first defeat, she states that she's impressed, but that it doesn't mean she'll give up her dream. She goes on to state that a Duelist's courage is put to the test after a defeat, not a victory, and that she is confident that her loss will strengthen her, leading her to achieve her dream. Mai then leaves the player with a warning that she'll be much tougher to defeat the next time they Duel.

After the player redeems their final unclaimed reward for Mai Valentine's Character Unlock Missions, they will encounter Mai again, who declares that because her friends are always around to help her overcome any obstacle, her spirit won't be broken that easily, and that she'll fight to the end. She tells the player to watch as her monsters dance their way to victory, and shows them her "Harpie Lady Sisters" card. 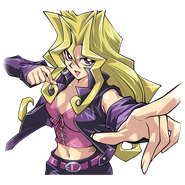 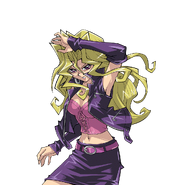 Add an image to this gallery

Scent of the Wind
Monsters (17)

Scent of the Amazoness
Monsters (14)

Pride of the Amazoness
Monsters (13)

Power of the Amazoness (incomplete)
Monsters

Pride of the Amazoness
Monsters (16)

The following lists are the rewards the player accumulates from having Mai Valentine reach a certain Level.

When dueling against Level 40 Mai Valentine, these are the only cards that can drop; at lower levels, cards from the standard pool for Legendary Duelists may also drop.

When dueling against Level 40 Elegant Mai, these are the only cards that can drop; at lower levels, cards from the standard pool for Legendary Duelists may also drop.

Retrieved from "https://yugioh.fandom.com/wiki/Mai_Valentine_(Duel_Links)?oldid=4379290"
*Disclosure: Some of the links above are affiliate links, meaning, at no additional cost to you, Fandom will earn a commission if you click through and make a purchase. Community content is available under CC-BY-SA unless otherwise noted.
... more about "Mai Valentine (Duel Links)"
RDF feed
DULI Deck
Mai Deck +, Scent of the Wind +, Harpie Lady +, Scent of the Amazoness +, Pride of the Amazoness +, Elegant Storm +, Beautiful Minions +, Flight of Beauty +, Power of the Amazoness +  and Alluring Tactics +
English name
Mai Valentine +
Gender
Female +
Video game appearances
Yu-Gi-Oh! Duel Links +