Priest Mahado is a character in the Yu-Gi-Oh! manga. This is the original depiction of Mahado, known as Mahad in the English anime.

Mahado was a sorcerer and High Priest, tasked with guarding the royal tombs, while serving Pharaoh Akhenamkhanen and later Pharaoh Atem. He invested a deal of his magical abilities suppressing the evil powers of his Millennium Item, the Millennium Ring, making himself appear weaker. His guilt over past failures led to him facing Bakura, King of Thieves, alone with his powers unrestrained. During the battle, he gave his life to fuse his ba, with his ka, the Magus of Illusion. As a ka, he continued to serve Atem in his battles.

With the Egyptian ka battles, recreated through Duel Monsters, Mahado's ka form was represented by the "Dark Magician" card.

Mahado was a sorcerer in Ancient Egypt. Due to his magical skills, he was summoned to become a High Priest, serving Pharaoh Akhenamkhanen and acquired the Millennium Ring. The ring possessed a dark power, which he believed it had gotten by absorbing the evil of the last priest who wore it. He used his own power to suppress the evil powers of the ring, for the safety of everyone else. Due to the magic, he invested in this, his powers otherwise appeared significantly weaker, including the strength of his spirit ka, the Magus of Illusion.[1]

At some point, Mahado took on Mana, as an apprentice sorcerer and would frequently tell her off for treating the palace like a playground.[1]

The Millennium Ring granted Mahado knowledge of the Kul Elna massacre, conducted in the forging of the Millennium Items. He presented this knowledge to Akhenamkhanen, causing him to fall sick form the guilt and eventually die from his illness. Afterwards, Akhenamkhanen's son, Atem, inherited the throne.[2]

Five years after the death of Akhenamkhanen,[2] Seto noted the recent influx of tomb defilement, following the trial of a graverobber. Since Mahado was in charge of guarding the royal tombs in the Valley of the Kings, Seto scolded Mahado for failing in his duties. Mahado apologized, but in mitigation claimed the auguries, he received from the Millennium Ring had been very erratic lately and with the vast increase of ka nesting in people's souls, he could not detect every sinner and evil intention. He then requested Atem's permission to enlist more troops to strengthen his guard.[3]

When Bakura, King of Thieves entered the pharaoh's palace, the Millennium Ring began to react wildly, notifying Mahado of the presence of a great shadow power.[3] Mahado took part in the ensuing battle with Bakura and summoned, the Magus of Illusion. When Atem was vulnerable to Bakura's Diabound, Mahado prepared to protect him with the Magus of Illusion, but Seto lacked confidence in its power and summoned Battle Ox. Battle Ox created an opening, which Seto instructed Mahado to use to attack. He got the Magus of Illusion cast the "Curse of Illusions", restraining Diabound. Despite this the High Priests still struggled to fight Diabound and were ordered by Atem to step down.[4] Mahado then witnessed the revelation of Atem, as the chosen pharaoh, capable of wielding the three hidden gods, as he summoned Obelisk, forcing Bakura to retreat.[5]

In preparation from further attacks from Bakura, the High Priests took part in mock ka battles to strengthen themselves. In one battle, Mahado was teamed with Isis and Kalim and they faced Akhenaden, Seto and Shada. Mahado summoned the Magus of Illusion and tried to use its "Curse of Illusion" on Seto's Duos, but Akhenaden summoned Dark Ushebti, which became the target of the spell. Mahado's team was ultimately defeated by Duos, which Seto strengthened through the sacrifice of his teammates' ka. After the battle, Seto criticized Mahado for having such a weak ka and called it unfit to guard the pharaoh's tomb.[6]

Security was tightened at Akhenamkhanen's tomb and Mahado arranged to use himself as part of a new trap for Bakura, willing to give his life because Atem had forgiven him. Without disclosing the details, he assured Atem and Siamun Muran that the tomb now had a trap that would stop any thief. Seto was not fully convinced and suggested that Mahado be stripped of his priesthood should the tomb got robbed again. Atem then asked that Mahado not to be blinded by guilt and just focus on fulfilling his duties.[1]

As Mahado made his way to the tomb, he caught Mana hiding in a pot. She claimed to have come to see him off, which annoyed him since she was postponing her magic practice. Simon interrupted the two and brought up his suspicions that Mahado intended to face Bakura himself. He advising against this, believing Mahado's ka to be too weak. Mahado questioned Siamun on the capabilities of ka being enhanced by the strength of their hosts' heart and argued that his devotion to the pharaoh would strengthen his ka.[1]

Mahado guarded the inside of the tomb, while his troops were stationed outside. Before entering the tomb, he sensed Bakura's presence with the Millennium Ring. Bakura quickly dispatched the soldiers at the entrance and walked inside, where Mahado confronted him on a bridge. Outside Mahado's men blocked the entrance with a boulder and erected a stone slab. If Mahado were to die fighting, his soul would take form on the tablet. If that happened before the third sunrise, they were to leave the tomb sealed forever. Bakura was aware that a trap had been set, but followed though as he hoped to take the Millennium Ring from Mahado.[1]

Bakura summoned Diabound, which had grown since their previous battle. With no fear of bystanders being harmed, Mahado refocused his powers from suppressing the evil of the Millennium Ring to strengthening his ka. So the Magus of Illusion was significantly more powerful than when they last battled.[1] Mahado had the magus dodge Diabound's attacks and strike back. He then transferred his heka to the ka, so it could attack again. The attack had some impact on Diabound, who disappeared into the walls. Bakura commended Mahado's strategies, before using his knowledge of the tomb to exploit the traps as weapons. Although Mahado was able to avoid the traps, it left him open to an attack from Diabound. Mahado managed to survive the attack and cast a single-use spell; as a spirit sorcerer he was able to give his life to merge his ba and ka. He allowed himself to be hit by one of the swinging axe traps and in death fused his soul with the Magus of Illusion, forming the Dark Magician. As Dark Magician, Mahado hit Bakura with his "Black Magic" attack, damaging both Bakura and Diabound and causing Bakura to fall into the tomb's abyss.[7] Initially unbeknownst to Mahado, Bakura survived the attack and took the Millennium Ring.[8]

Outside the tomb, the Dark Magician took form on the slab the soldiers had erected.[7] When Atem and the High Priests learned what had happened, they were unsure of the faith of Bakura and the Millennium Ring and Seto blamed Mahado for putting them in such a state. Mana wept in front of the slab and begged Atem to call Mahado's spirit from it, but Isis insisted Mahado be given time to rest and reminded her that her heka was not yet strong enough to see spirits. Out of respect to Mahado, Mana vowed to become an amazing magician.[9]

Shrine of the Underworld battle

During the battle with Bakura at the Shrine of the Underworld, Mahado appeared as the Dark Magician and repelled the ghosts that were attacking Atem.[10] He assured Atem, who was distraught over learning of the Kul Elna massacre, that the massacre took place without Akhenamkhanen's knowledge. He confessed to bringing the news of the massacre to Akhenamkhanen, resulting in his sickness and death.[2]

Mahado used his "Afterworld Warp" ability creating portals to absorb and redirect an attack from Diabound. Atem reminded him of Diabound's evasiveness, so Mahado directed the attack at a pillar, causing it to fall towards the Tablet of the Pharaoh's Memories. Bakura needed the tablet and coped their tactic, so he had Diabound to catch the pillar. With Diabound unable to use its wall-phasing ability without dropping the pillar, Mahado took the opportunity to hit it in the eye with a "Magic Blast" attack.[2] Mahado attempted to strike again, but Diabound broke the pillar and used its fragments as a shield.[11]

When Diabound used its "Shadow Camouflage" ability to make itself invisible, Mahado used his "Thousand Magic Blasts" attack to pierce the ceiling, causing light from outside to expose Diabound's location. He then hit Diabound with a "Thousand Black Magic Blasts" attack.[11] Diabound absorbed the souls of the Kul Elna ghosts, allowing it to create an aura, shielding itself from further attacks from Mahado. Diabound landed a hit on Mahado and was about to make a fatal strike, until the Dark Magician Girl, summoned by Mana, swooped in and saved him.[12]

Mana was not at the level that her ka could battle, so she had Dark Magician Girl transfer her heka to Mahado.[13] Mahado, in turn, used it to double the strength of Duos Dragon and began chanting a spell, while Duos Dragon battled Diabound. Although Duos Dragon was defeated, it managed to melt a hole in Diabound's shield, which Mahado used to attack full force with "Black Magic", destroying Diabound.[14]

Seto, possessed by Akhenaden, faced Atem in a Duel, for the title of King. Seto summoned The White Dragon and with his ba too low to summon the gods, Atem summoned Mahado. Atem and Mahado were impressed by the power of the dragon's heka and understood the futility of trying to fight it. Instead Atem, instructed Mahado to attack the slab the dragon had been summoned from.[15]

Mahado dodged The White Dragon's "Reign of Destruction" attack and fired a "Black Magic" attack at the opposing slab. However, he was too slow as the dragon's attack destroyed Mahado's slab, causing him to disappear.[15]

Some time after Atem's death, Seto commissioned the creation of the Tablet of Memories, which depicted Atem and Seto's battle, including an illustration of Mahado, as the Dark Magician.

Egyptian ka battles were recreated through the Duel Monsters card game,[16] which included a "Dark Magician" card, based on Mahado. Sugoroku Mutou possessed a copy of the card and passed it to to Yugi Mutou.[17][18] Yugi along with Dark Yugi, the amnesic reawakened Atem, used the card in numerous Duels, including one against Pandora, who possessed two copies of the card.[19]

During Seto Kaiba's semifinal Duel against Dark Yugi, the destruction of their God cards triggered a vision, in which they saw the battle between Seto and Atem. The vision ended during the summoning of the White Dragon and Mahado.[20] Kaiba and Dark Yugi then Summoned their corresponding cards, "Blue-Eyes White Dragon" and "Dark Magician".[21] Dark Yugi believed they were fated to continue the battle.[22]

When Dark Yugi played the Shadow RPG against Dark Bakura, in the twentieth century, he replayed his life as Pharaoh Atem. Events concerning Mahado were largely the same in the RPG as the past.[23]

Unlike the original course of events:

When Atem passed through the Door to the Underworld, his companions from ancient Egypt, including Mahado, stood at the other side.[28]

Dark Side of Dimensions

During the final battle against Dark Diva, Atem returned (superimposed over Yugi) and, during his Draw Phase, created "Palladium Oracle Mahad", a new Duel Monsters card based on Mahado (as the card he grabbed glowed with golden light). Also, it is very strongly shown that Mahado's soul is embedded within the card, much like with "Dark Magician", as it kneeled before Atem when Summoned before attacking.[29]

Mahado has Summoned the following ka.

Mahado is capable of using Heka and has performed the following spells. 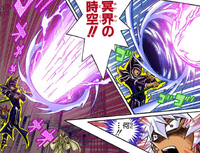 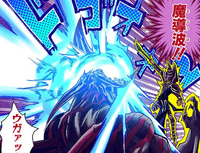 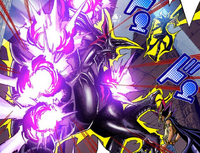 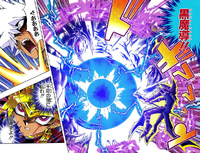 Black Magic
Add an image to this gallery

Retrieved from "https://yugioh.fandom.com/wiki/Mahado_(manga)?oldid=4003082"
Community content is available under CC-BY-SA unless otherwise noted.