Start a Wiki
For the card, see "Palladium Oracle Mahad".

Mahad, known as Mahado (マハード Mahādo) in the Japanese version, was one of the six priests who served under Pharaoh Atem and was the wielder of the Millennium Ring. In an attempt to defeat Thief King Bakura, he sacrificed his life and fused his Ba and his Ka together to create the "Dark Magician". As the Dark Magician, he would continue to serve Atem long after he was gone, later appearing during the Ceremonial Battle when he was summoned by Atem in his Duel against Yugi Muto.

Mahad was a kind and compassionate man with a deep sense of loyalty. He was considerably patient in his role as Mana's instructor in the magical arts, though at times was known to become frustrated at her reluctance to take her teachings seriously. Mahad is also very selfless, looking out for the well being of others before his own.

One of his most notable traits was that of his unwavering loyalty towards his childhood friend, Atem, whom he served faithfully and with strong conviction. In addition, he seemed to have had a close relationship with Isis.

The name Mahad is a male Muslim name of Arabic origin, meaning "one who is great". His Japanese name, "Mahado", can likely be translated to "magical wave", hinting his use in Spellcaster monsters such as "Illusion Magician".

As a child, during the time when Aknamkanon was Pharaoh, he, Atem, and Mana were good friends. Mahad himself was of noble lineage and was tasked with guarding and protecting the prince. At one point, he got bitten by a snake, and Atem saved him by sucking the venom out.

Mahad fought Thief King Bakura when he raided the palace alongside Atem and the other priests. Bakura later fled when Atem summoned "Obelisk the Tormentor". He later led Bakura to the Valley of the Kings. He and Bakura entered a tomb, where he had sealed his power, and his men blocked off the entrance so that Bakura can't flee. However, during the fight, despite obtaining the great power, he sacrificed himself to fuse his ka and ba together to form "Dark Magician" after he was severely weakened. He then made a blast so powerful that Bakura was believed to have died. He continued to serve Atem as the Dark Magician, and even destroyed Bakura's Diabound during their fight at Kul Elna. He participated in the final battle aganist Zorc Necrophades, when the latter began his assault on the palace. He and the Dark Magician Girl, Mana's ka, attempted to destroy Zorc with a combined attack but Zorc was unaffected and easily wiped them out. Mahad's soul was among others waiting for Atem in the afterlife.

As one of the Sacred Guardians, Mahad was the wielder of the Millennium Ring, which granted him access to a various number of abilities, including, but not limited to, initiating Shadow Games and summoning spirit monsters known as Ka.

A secret known only to a select few, Mahad was one of the most powerful magicians among the members of the Pharaoh's court, being extremely well-versed in the ways of magic and sorcery, as well as having an extensive knowledge of magical spells. At some point, Mahad sealed a portion of his power within a tomb, whose location would remain disclosed. 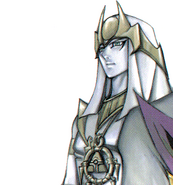 Mahado (manga)
Add an image to this gallery 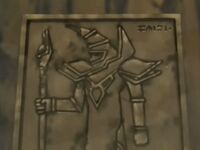 Mahad/Dark Magician after being imprisoned within a tablet 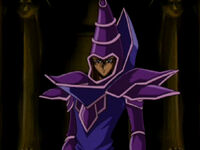 Mahad as Dark Magician
Add an image to this gallery

Retrieved from "https://yugioh.fandom.com/wiki/Mahad?oldid=4278137"
Community content is available under CC-BY-SA unless otherwise noted.