Magician's Force is a Booster Pack, which combines the Japanese sets Advent of Union and Champion of Black Magic.

In 2005, a worldwide English version of the set (MFC-ENXXX) was printed in the Master Collection Volume 2.

It contains a new set of cards called Union monsters, with the ability to combine and strengthen other monsters, along with plenty of Spellcaster-Type monsters and support cards. It contains the "Amazoness" archetype and introduces the Spell Counter mechanic in which certain cards could only be played by removing a number of "spell counters" which are usually acquired by playing Spell cards.

This is the first set to fully use the term "Spell Card", after the rename from "Magic Card", despite later prints of Pharaonic Guardian doing such.

When the 1st Edition packs of Magician's Force were released, the artwork for "Dark Paladin" was that of the "Duel Masters Guide" Dark Paladin with the Dark Magical Circle background. This was because Upper Deck, the company that took care of KONAMI's English releases, switched the scans of Japan's "Structure Deck: Yugi Volume 2" Promo Dark Paladin and the "Champion of Black Magic"'s Dark Paladin by accident prior to MFC's release.

Upper Deck would soon realize their mistake and corrected the featured artwork for the Unlimited print of MFC as originally intended. However, discussion amongst players and collectors grew rampant as to why the change had occurred between the 1st Edition and Unlimited prints. This prompted Upper Deck to become transparent with their mistake and in February of 2004, they offered a solution with a published article on their website and published in Issue #10 of Yugioh Beckett Magazine, inviting players to mail in the error 1st edition copy and receive a corrected 1st edition copy.

Most people didn't mail in their cards, thinking the Misprint would be more rare and valuable which was unfortunate. In the end, the Corrected 1st Edition Art version is now considered one of the rarest and most valuable cards. Thus, it is unknown how many Corrected 1st Editions there are in circulation.

In the English and Asian-English versions of this set, each pack contains 9 cards and each box contains 24 packs. In the Korean version, there are 5 cards per pack.

The set contains 108 cards, including: 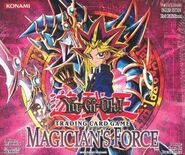