Lumis, known in the Japanese version as Mask of Light, is a member Marik Ishtar's Rare Hunter organization. He is the Tag-Team partner of Umbra, and together they have Dueled with Seto Kaiba and Yugi Muto. Lumis wears a white-colored, smiling mask on the right side of his face.

Despite his size, he is very acrobatic, and managed to jump to a skyscraper through lower rooftops.

He, along with Umbra, was ordered by Marik Ishtar to Duel Seto Kaiba and Yami Yugi in a Tag-Team Duel. They were Dueling atop a skyscraper, and each player is standing on glass. The loser's glass will shatter, and will fall to the bottom of the skyscraper, killing the loser (in the dub, a "vortex" will open, and the loser's mind will be sent to the Shadow Realm). During the Duel, Lumis and Umbra heavily relied on teamwork, unlike Kaiba and Yugi, and were using a "Mask" Deck, preventing them from Tributing monsters to Summon Kaiba's "Obelisk", or Yugi's "Slifer". However, Kaiba used "Soul Exchange" to Tribute Umbra's monsters, who were originally Yugi's monsters, to Summon "Obelisk". He then defeated Umbra with "Obelisk", making Lumis scared for Umbra, due to the glass shattering underneath him, leaving an enraged and mournful Lumis to forfeit the duel as his deck didn't contain many monsters . Marik took over his mind to talk to Yugi and Kaiba, and fell unconscious (in the dub, Marik sent his mind to the Shadow Realm). 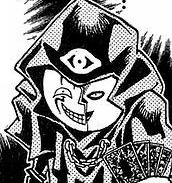 Lumis and Umbra play Mask-themed God Seal Decks, that weaken and manipulate the opponent's cards while lowering their opponent's Life Points. Lumis plays a Deck with more Spell and Trap Cards while Umbra plays a Deck with more Monster Cards. They also rely on teamwork to support each other, while taking down the opponents. When provoked by Kaiba, coupled with several slip-ups, their teamwork faltered, leading them to defeat.