View source
watch 02:34
Fire Emblem Warriors: Three Hopes - The Loop
Do you like this video?
Play Sound
This article is about the first collection. For the series, see Legendary Collection (series).

The promotional cards include the original versions of the Egyptian Gods; "Obelisk the Tormentor", "Slifer the Sky Dragon" and "The Winged Dragon of Ra", and the signature cards of Seto Kaiba, Yugi Muto and Joey Wheeler; "Blue-Eyes White Dragon", "Dark Magician" and "Red-Eyes Black Dragon".

The North and Latin American version of the set contains one of each of the following Booster Packs, without -EN in their Set Numbers:

The European and Oceanic version of the set contains two of each of the following Booster Packs.

The reason why six specific packs were chosen for the North and Latin American version of this product is because they were "the 6 best-selling packs from the classic era," as quoted by Kevin Tewart in one of his posts on Pojo. 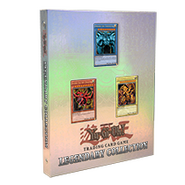