With many cards from the manga and anime series, the 126 cards in this English set were chosen from the Japanese packs Legend of Blue Eyes White Dragon and Phantom God, the former of which this set is named after. After being discontinued by Upper Deck Entertainment, these packs were prized for the rare "Blue-Eyes White Dragon" and the "Forbidden One" cards.

Several of the European versions of Legend of Blue Eyes White Dragon (European English, European French, German, and Italian) only contained 103 of the 126 cards present in the North American version. Many of the cards not printed in this European release of this set were later printed in the European release of Magic Ruler (for those languages). Later, Upper Deck removed the regional restriction on cards, opening up the North American card market to European collectors and players.

In 2004, a worldwide English version of the set (LOB-ENXXX) was printed in the Master Collection Volume 1. In all regions, this printing included the cards from the original North American release. This print made errata on many cards, including changing the term Magic Card to Spell Card and changing the name of "Trial of Hell" to "Trial of Nightmare".

In 2010, an Unlimited Edition North American version of the set (LOB-XXX) and an Unlimited Edition European version of the set (LOB-EXXX) was reprinted again and released with the Legendary Collection. This print run ignored the Master Collection Volume 1 errata and used the original North American text from Legend of Blue Eyes White Dragon, but still changed Magic Card to Spell Card and changed the name of "Trial of Hell" to "Trial of Nightmare".

The set was re-released in South Korea in Korean on March 15, 2011.[note 1] A coupon was included on the front flap of the box lid which could be exchanged for the Legend of Blue Eyes White Dragon promotional cards.

Many of the cards have simplistic or no effects, making them useful for introducing players to the game.

The European English, French, German and Italian prints of this set contained 103 cards, including: 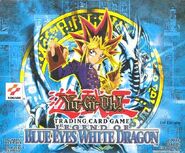 North American English
Add an image to this gallery

Retrieved from "https://yugioh.fandom.com/wiki/Legend_of_Blue_Eyes_White_Dragon?oldid=4086030"
*Disclosure: Some of the links above are affiliate links, meaning, at no additional cost to you, Fandom will earn a commission if you click through and make a purchase. Community content is available under CC-BY-SA unless otherwise noted.