Korean cards are manufactured by Daewon for distributing in South Korea. Their ID was K, then changed into KR.

Being part of the OCG, Korean cards follow Japanese printing schedules. However, they also follow some TCG product lines, such as the Hidden Arsenal series, and have a few exclusive sets and cards (such as Token cards from Anniversary Pack). In many Booster Packs, cards have also debuted in the Korean versions rather than the Japanese or the international version.

Korean cards have their own backing, with the first Korean logo. They use a terminology translated from Japanese, but they are formatted with the TCG style. For example, the type line "[Dragon/Synchro/Effect]" is written "[드래곤족/싱크로/효과]", using a slash instead of a middle dot as of the Japanese style ([드래곤족・싱크로/효과]; the Japanese version has also switched to using slashes only from Series 10 onwards); the copyright text on the bottom-right corner is English. They also use censored or anglicized TCG artworks, though the Korean-dubbed shows have uncensored OCG artworks.

The Korean languages does not usually use ruby like Japanese, but due to the core archetypal mechanics that rely on how names are formatted precisely in Japanese, some archetypes have to adopt ruby to avoid phonetic ambiguity, even though the Korean text engine for laying out cards has never been optimized for that. 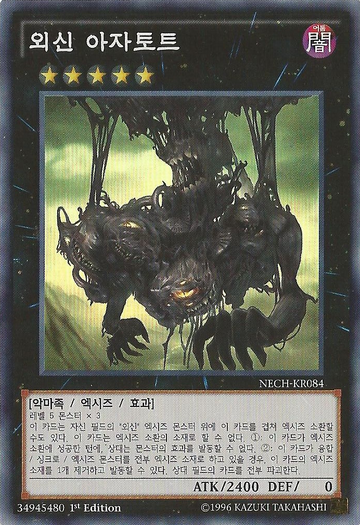 Retrieved from "https://yugioh.fandom.com/wiki/Korean?oldid=4039504"
*Disclosure: Some of the links above are affiliate links, meaning, at no additional cost to you, Fandom will earn a commission if you click through and make a purchase. Community content is available under CC-BY-SA unless otherwise noted.