Kokurano ( Kokurano) is a character in the Yu-Gi-Oh! manga. He is a self-proclaimed psychic in Class 1-A of Domino High School.

Kokurano set-up a stand in a classroom, aided by a couple of female assistants, who strongly admired his alleged powers. At the stand, he offered predictions to other students. He told one fangirl, that as long as she doesn't die, she will continue to live. Although the statement was meaningless, she was easily impressed. As he called for the next in line, a mild earthquake occurred. Kokurano then produced a slip of paper, saying there would be an earthquake that day, claiming to have predicted it this morning.

When Anzu Mazaki came for her prediction, Kokurano made plans to seduce her. He told her that she would see a wonderful man, already close to her, who she will fall so deeply in love with, she will swoon before him. He told Katsuya Jonouchi that he was having bad luck, but didn't give him any advice on it, which Jonouchi had been hoping for. He got upset when Yugi said he does not believe in psychics and told Yugi that countless letters would fall from the heavens and bring disaster upon him.

When Yugi went to the library, Kokurano knocked over the book stands in his direction, but Yugi transformed into Dark Yugi and saved himself.

Kokurano met Anzu afterwards and knocked her out with chloroform, which he intended to be the swoon before the wonderful man he predicted. Dark Yugi caught up with Kokurano and challenged him to a game. In the manga, the game was Paper Crash! and players had to pull sheets of paper out from under the chloroform bottle, without letting it fall. Kokurano tried to use his powers to levitate the bottle, but wound up knocking himself out with it.

Kokurano was left lying on the floor with his cloak spread out, showing notes containing various possible future events, which Kokurano would pass off as predictions should they come true. Yugi carried Anzu away, leaving Kokurano to have his powers exposed as fake, before he woke up. 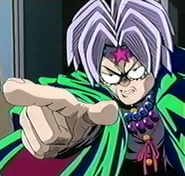 Fortuno (Dungeon Dice Monsters)
*Disclosure: Some of the links above are affiliate links, meaning, at no additional cost to you, Fandom will earn a commission if you click through and make a purchase. Community content is available under CC-BY-SA unless otherwise noted.
... more about "Kokurano"
RDF feed
English name
Kokurano +
Gender
Male +
Manga appearances
Yu-Gi-Oh! (manga) +
Advertisement