View source
watch 02:56
Raise a Floppa - The Loop
Do you like this video?
Play Sound
"Koji" redirects here. For the Tag Force character, see Koji Yamamoto.

Koji Nagumo is a character in the Yu-Gi-Oh! anime. He is the anime's incarnation of the manga character, Koji Nagumo.

Nagumo is a gamer with interest in a variety of games, ranging from Monster Fighter to Duel Monsters. He engages in games to make money and often focuses on the potential resale value of desirable collectibles, including Monster Fighter figures and "Obelisk the Tormentor". Nagumo is a bully, relying on his physical strength to win games when he is in danger of losing, and using his hobbies to lure in potential victims to extort with his strength.

Nagumo first appears as a participant in the Battle City Tournament. He had just defeated an opponent, but was unhappy with the card he has won through the ante rule after one of his Duels. He demanded that his opponent give also him his second rarest card.

However, Mokuba Kaiba appeared and calls a foul for changing the ante. Koji insulted Mokuba, calling him “Junior”. However Seto Kaiba appears behind him and told Nagumo off, saying that speaking rudely to Mokuba dishonors Kaiba and the Battle City tournament. Kaiba challenged him to a Duel, anteing a briefcase full of rare cards, which excited Nagumo. He allowed Koji to use the cards from the briefcase in the Duel, but said he would take them back after he won. Koji, overconfident at his newly empowered Deck, suffered a devastating defeat as Kaiba unleashed “Obelisk the Tormentor”, and took his Locator Cards. Koji was left traumatized by Obelisk’s overwhelming power, and wound up screaming in terror as he relived the image of the God crushing him.

During the finals, Nagumo observed the fight between Yugi and Kaiba from television screen in Domino City, along with the other Duelists that had been eliminated from the tournament.

During Yu-Gi-Oh! the Movie: Pyramid of Light, Koji was a bystander during Joey's Duels in front of Domino High School. His hair is brown in this instance.

In Yu-Gi-Oh! GX, Nagumo was listed in Axel Brodie's database of Domino High School students as "Kouji Nagumo". Later, Koji's name was listed among the disappearing residents of Domino City as Trueman sent them to the World of Darkness. [2] When Nightshroud was defeated, all the victims were freed. 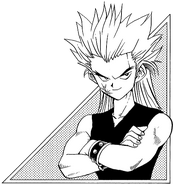 A few cards were scattered over the pavement after Nagumo's Duel against Seto Kaiba. It is not clear if they were part of his normal card set or taken from Kaiba's briefcase.

*Disclosure: Some of the links above are affiliate links, meaning, at no additional cost to you, Fandom will earn a commission if you click through and make a purchase. Community content is available under CC-BY-SA unless otherwise noted.
... more about "Koji Nagumo"
RDF feed
Anime appearances
Yu-Gi-Oh! (anime) +, Yu-Gi-Oh! The Movie: Pyramid of Light +  and Yu-Gi-Oh! GX +
English name
Koji Nagumo +
Gender
Male +
Advertisement