Kisara (キサラ Kisara) is a mysterious woman who appears in Yu-Gi-Oh! series. She carries the spirit and soul of the mighty "Blue-Eyes White Dragon".

In the OCG/TCG, "Maiden with Eyes of Blue" is based on Kisara.

Kisara has pale skin, white waist-length hair with tones of baby blue and bright blue eyes which is very unusual for an Egyptian. This is probably due to the fact that she carries the spirit and soul of the mighty "Blue-Eyes White Dragon" deep within her.

In the manga, Kisara is portrayed as mysterious and lonely. Despite her timid nature, she exudes a quiet confidence. When faced with death, she accepts it without a fight; her passive personality is a testament to her weariness of life and the abuse it brings with it. Seto's selfless intervention on her behalf confuses her, but her gratitude increases and so her dragon is summoned from the depths of her sub-conscious.

Unknowingly, she becomes a beacon of light for Seto's increasingly jaded personality. As Seto saves her for a second time, these alien actions continue to quietly astonish her. However, in her final act of quiet strength, she is killed; as opposed to running to freedom, she slips back, to not leave Seto at the mercy of his father.

In the anime, Kisara is similar to her manga counterpart, but with some marked differences. She is more assertive, her link to Seto more defined and from the get go she allows herself to be his protector and the compass on which his conscience rests. As opposed to being overwhelmed by the events around her, she manages to understand her role in them and her sacrifice is amplified over the original, for she knowingly ends her life protecting Priest Seto.

The Blue-Eyes White Dragon is the manifestation of her inner strength and light.

In the past, Seto saved Kisara from slave traders, and she repaid him by unconsciously releasing her inner dragon spirit after the traders set fire to his village and killed his mother.

Years later, Seto again stumbles across Kisara being stoned because of her pale white skin, deep blue eyes and snow white hair. Shada senses the immeasurably strong strength and power within her—which he deems "equal to that of the Egyptian gods". Seto takes her back to the palace, where he recognizes her as the girl he once saved some years ago.

After Akhenaden pledges his loyalty to Zorc Necrophades, he kidnaps Priest Seto - revealed to be his son - and tries to brainwash him into usurping Pharaoh Atem. Kisara is able to save him, although she dies taking a blow originally meant for Seto. (In the English version, Akhenaden said he knew that Kisara would try to protect Seto, and it was an effort to try and weaken her.) Akhenaden is then able to seal the Blue-Eyes in a stone tablet, along with Kisara's spirit. However, she later uses her spirit dragon to destroy Akhenaden and free Seto from his mind-control. She then pledges to serve him in this form, making him the new keeper of the Blue-Eyes White Dragon. Takahashi has stated that he originally planned for the story to have further explored the relationship between Seto and Kisara (including a subplot where Seto rebels against the pharaoh to avenge Kisara's death), but in order to meet a deadline these details had to be cut. According to Takahashi, Seto's feelings for Kisara are the basis of Kaiba's modern-day obsession with the "Blue-Eyes White Dragon."

After her death, Seto holds Kisara's lifeless body in front of the tablet - notably, this is the vivid vision Kaiba constantly sees during his battle with Ishizu in Battle City. 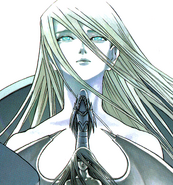 *Disclosure: Some of the links above are affiliate links, meaning, at no additional cost to you, Fandom will earn a commission if you click through and make a purchase. Community content is available under CC-BY-SA unless otherwise noted.
... more about "Kisara"
RDF feed
Anime appearances
Yu-Gi-Oh! (anime) +
Gender
Female +
Advertisement