Karim (神官カリム Shinkan Karimu) is one of the six Sacred Guardians that served under Pharaoh Atem in Ancient Egypt 3000 years ago during his reign, and was the owner of the Millennium Scales at the time.

A powerful and incredibly loyal man, Karim was dedicated to serve the Pharaoh, going as far as even sacrificing his life for him. A powerful Priest, he seemed to partner up with Seto and often fused their Ka's together. He fought alongside Atem and the others when Bakura waged war on Egypt, but ultimately died in the conflict; heavily wounded, he gives up the last of his life force to Shada in order to ensure he will continue to protect the Pharaoh.

Karim is a Priest serving Pharaoh Atem. When Thief King Bakura raided the palace, he attempted to fight off against him, but failed. Bakura later fled when Atem Summoned "Obelisk the Tormentor". He took part in the fight in Kul Elna against Bakura and his Diabound. He was severely weakened by Bakura. When Bakura separated the Priests from each other, he gave the last of his ba to Shada so he could fight off against the "Giant Axe Mummy". 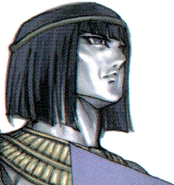 Kalim (manga)
Add an image to this gallery

Retrieved from "https://yugioh.fandom.com/wiki/Karim?oldid=4241865"
*Disclosure: Some of the links above are affiliate links, meaning, at no additional cost to you, Fandom will earn a commission if you click through and make a purchase. Community content is available under CC-BY-SA unless otherwise noted.
... more about "Karim"
RDF feed
Anime appearances
Yu-Gi-Oh! (anime) +
English name
Karim +
Gender
Male +
Manga appearances
Yu-Gi-Oh! Millennium World +